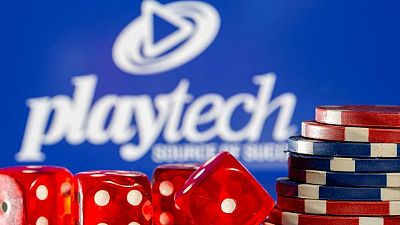 – Britain’s Playtech said on Thursday its second largest shareholder could make a takeover approach for the gambling software firm after its proposed $2.8 billion buyout by Australia’s Aristocrat Leisure fell through.

Playtech said it has agreed to a request from TTB Partners to release it from UK takeover rules that bars a company or its affiliates from making fresh offer for six months after walking away.

The request from the Hong Kong-based investment firm on behalf of an unnamed investor group it plans to advise comes after Playtech shareholders rejected Aussie gaming company Aristocrat’s takeover offer on Wednesday.

Playtech said there was no certainty that any approach from TTB, its second largest investor with 4.97% stake after Dublin-based Setanta Asset Management, would materialise into an offer.

TTB did not immediately respond to a request for comment.

Shares in Playtech jumped 10% to 643.5 pence on the London Stock Exchange by 0840 GMT, adding to a small gain from Wednesday after the British firm said it was considering other suitors.

Playtech, which calls itself the world’s largest supplier of online gambling and sports betting software, has attracted takeover interest in recent months as companies look to capitalise on a boom in online betting during the pandemic.

Besides Aristocrat and Gopher, a consortium led by former Formula One team boss Eddie Jordan had also shown interest, but withdrew from the race.

Any offer from TTB may create some “pricing tension”, analysts at Peel Hunt said, as Playtech is considering other M&A proposals. They said it depended on the aggregate holding of the unnamed investor group that TTB plans to advise.

The 680-pence-a-share offer from Aristocrat received less than 55% of Playtech shareholders’ votes, failing to meet the 75% requirement.

Aristocrat blamed an unnamed group of investors “who built a blocking stake” for the failure.