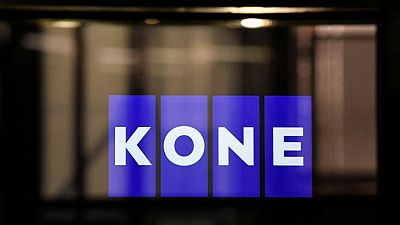 HELSINKI -Reduced liquidity in the Chinese property sector and rising supply chain costs are expected to weigh on 2022 profits, elevator maker Kone said on Wednesday, as it reported a year-on-year fall in fourth-quarter core earnings.

The Finnish company’s share price fell by as much as 3% before recovering to trade 0.9% lower in afternoon trade, underperforming the wider index, which was slightly higher.

“We expect the (new equipment) markets in China this year to remain on a solid level, although to decline somewhat compared to 2021. And that’s of course because of the liquidity situation in the property markets,” Chief Executive Henrik Ehrnrooth told reporters.

“We can see that land sales, new construction starts are both down,” he said.

Ehrnrooth said Kone expected the Chinese new equipment market would return to its 2019 level in 2022 and the business sector would grow outside China.

It also predicted its services business would continue to perform well.

“The adjusted EBIT margin, on the other hand, is expected to decline due to lower margins on orders received in 2021 and continued challenges in the cost environment,” Ehrnrooth said in a statement.

Global supply chain challenges were also showing no sign of going away, Ehrnrooth said, adding sea freight charges were five to six times higher than before the pandemic.