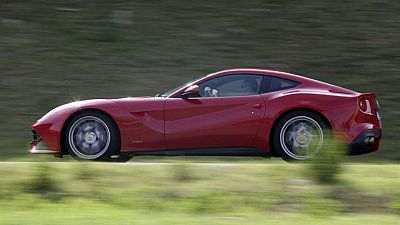 MILAN -Ferrari has orders stretching into 2023 after delivering a record number of cars last year, Chief Executive Benedetto Vigna said on Wednesday, reflecting a surge in demand for luxury vehicles despite the COVID-19 pandemic.

That demand allowed Ferrari to predict a rise in its core earnings this year, in the wake of record results in 2021.

“We have the strongest-ever order book in our history, up double digits versus the prior year and covering well into 2023,” Vigna told analysts, presenting the annual results after taking charge of the company last September with a task to lead it into a new era of cleaner, quieter and interconnected mobility.

Milan-listed shares in Ferrari reversed early losses and were up 1.4% by 1610 GMT.

Ferrari plans two new models this year, including the much-awaited Purosangue, its first sport utility vehicle (SUV), completing a plan to launch a total of 15 new vehicles it had announced in 2018.

Ferrari, whose ‘Prancing Horse’ brand is known worldwide for roaring combustion engines, has promised its first all-electric car in 2025, while it has already rolled out three hybrid models.

In a sign of a strong demand worldwide for luxury cars, last year Rolls-Royce, owned by Germany’s BMW, saw its sales soar 49% to a record and Porsche, part of Volkwagen, delivered more than 300,000 vehicles, with an increase in all regions.

Ferrari on Wednesday forecast adjusted earnings before interest, tax, depreciation and amortization (EBITDA) of 1.65-1.70 billion euros this year, up from 1.53 billion euros in 2021.

Last year’s result was in line with a company-provided forecast of around 1.52 billion euros, and represented a 34% increase on the previous year.

The margin on adjusted EBITDA hit a higher-than-expected record of 35.9% last year. That figure is expected to slip this year to between 34.5%-35.5% the company said.

Following this strong set of results, the company paid all its employees a record performance-linked bonus for 2021 of a gross amount as much as 12,000 euros.

Vigna, a tech industry veteran and former top executive at chip maker STMicroelectronics, will unveil the company’s future strategy at a capital markets day on June 16.

He has said that Ferrari would make technology partnerships a priority, as the company moves ahead with its electrification strategy while maintaining financial discipline.

As part of this discipline, Vigna said Ferrari would target capital expenditure of around 800 million euros this year and would seek to keep that as a peak going forward.