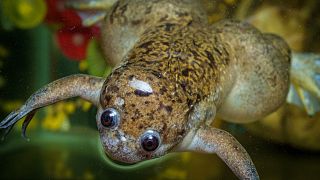 Scientists in the US have successfully regrown the lost legs of a group of frogs in a significant advance for regenerative medicine.

The research is an important step to one day helping people who have experienced the loss of a limb and opens the door to the potential use of a similar treatment on humans in the future.

The African clawed frog used in the research does not have the ability to naturally regenerate a limb and was treated with a five-drug cocktail over 24 hours. That brief treatment set in motion an 18-month period of regrowth that restored a functional leg.

“It’s exciting to see that the drugs we selected were helping to create an almost complete limb,” said Nirosha Murugan, research affiliate at the Allen Discovery Centre at Tufts and first author of the paper outlining the experiment.

“The fact that it required only a brief exposure to the drugs to set in motion a months-long regeneration process suggests that frogs and perhaps other animals may have dormant regenerative capabilities that can be triggered into action”.

How did it work?

Scientists triggered the regenerative process in the frogs by enclosing the wound for 24 hours in a silicone cap, which they call a BioDome, containing a silk protein gel loaded with the five-drug cocktail.

The drugs each had a different purpose, including tamping down inflammation and encouraging the new growth of nerve fibres, blood vessels, and muscle.

The bioreactor helped to stop the natural tendency to close off the stump, and instead encourage the regenerative process.

From just a day of treatment, many of the frogs continued to have significant regrowth over the next 18 months.

The new limbs were not perfect, but they moved and responded to stimuli, and the frogs were able to make use of it for swimming through water, moving much like a normal frog would.

For millions of patients who have lost limbs for reasons ranging from diabetes to physical trauma like war, the possibility of regaining function through natural regeneration remains out of reach.

But there are hopes that this study has brought scientists a step closer to the goal of regenerative medicine.

“We’ll be testing how this treatment could apply to mammals next,” said Michael Levin, director of the Allen Discovery Centre at Tufts.