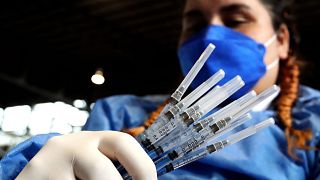 Countries around the world are taking steps to encourage vaccination against COVID - but is it working?   -   Copyright  ULISES RUIZ / AFP
By Tom Bateman  •  Updated: 28/01/2022

The world is two years into the COVID-19 pandemic and nearly a fifth of adults in the European Union still aren't fully vaccinated against the virus.

After a rapid take-up of first and second doses in mid-2021, the vaccination rate (with the exception of boosters) has slowed, according to information from the European Centre for Disease Prevention and Control (ECDC).

This has left European governments scrambling to get jabs into the arms of people who are eligible but have chosen not to take them. In January, Austria's parliament took the most radical step yet, approving controversial measures that would make COVID-19 vaccines mandatory for most adults, starting from February 1.

The move follows proof of vaccination mandates in countries like France, Germany and Italy, where COVID-19 passes control access to public transport, leisure activities and even the ability to work in some industries like health and social care.

But when governments put mandates like these in place, what actually happens to the vaccination rate?

A spike in demand

A pre-print study by economists at Simon Fraser University in British Columbia - which has not yet been peer-reviewed - found that as provinces announced new proof-of-vaccination mandates, the number of people getting jabbed went up.

As each province made its announcement separately, the researchers were able to identify peaks in first doses that matched with the announcement of stricter vaccination requirements.

"Generally speaking, as economists, we think that it is natural to expect that stronger incentives to become vaccinated would, on average and all else equal, lead to an increase in uptake," study co-author Alexander Karaivanov told Euronews Next.

Those stronger incentives translated into a 42 per cent rise in first doses in the week following an announcement, and a 71 per cent increase the week after that, the study said.

In all, among the five Canadian provinces that announced vaccine mandates by September 14, 2021, 287,000 additional first doses of the COVID-19 vaccine were given, the researchers estimated.

In Europe, stricter rules on proof of vaccination in France, Italy and Germany also appear to have boosted vaccination rates.

A pre-print study by the Bruegel think tank in Belgium found that vaccine passport-style measures like the French passe sanitaire increased uptake by 13 per cent in France, 9.7 per cent in Italy and 6.2 per cent in Germany.

The study - also not yet peer-reviewed - estimated that the higher vaccination rates could have averted thousands of deaths in the three countries and limited economic losses as a result of the pandemic.

Use of the passe sanitaire also kept enough intensive care beds in France free that another nationwide lockdown was averted, the study suggested. In Germany, however, the measures did not have as powerful an effect on ICU capacity.

"The announcements in France and Italy were particularly striking, as they were made by the central governments and backed by clear and consistent communication, with COVID certificates being required in most public venues all over the country," the study said.

"By contrast, COVID certificates were introduced more gradually in Germany with different rules and enforcement levels across states".

A patchwork of rules

The country-by-country differences have left Europe with a patchwork of COVID-19 vaccine mandates and vaccination rates.

In Ireland, Portugal and Denmark, over 90 per cent of adults have received at least two doses of the COVID-19 jab.

German lawmakers held their first debate on the issue on Wednesday, after chancellor Olaf Scholz in December indicated he would like to see mandatory COVID-19 vaccinations in law by the spring.

Other European countries have introduced mandates for specific professions or age groups, such as for healthcare workers in France and the United Kingdom.

Some countries have imposed vaccine mandates on older people who tend to be at higher risk from COVID-19.

Earlier this month Greece announced fines for unvaccinated over-60s and Italy mandated jabs for the over-50s.

But while the experts - and the scientific evidence - make it clear that getting vaccinated is the best way to keep yourself safe from COVID-19, there are objections to making the jabs compulsory.

In Austria, right-wing politician Herbert Kickl decried the decision to make the coronavirus vaccine compulsory, saying it "opens the door for totalitarianism in Austria. It's nothing else, it's the introduction of health care communism".

In response, the country's health minister Wolfgang Mückstein pointed out the protection vaccination offers against severe illness, and added: "If we want to escape the cycle of opening up and closing down, and the lockdowns, then we need this law – and an end to the hard measures for protection against corona".