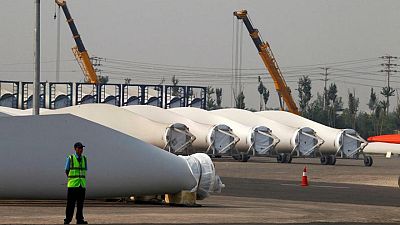 COPENHAGEN -Denmark’s Vestas warned on Wednesday it would have to raise prices for its wind turbines due to higher raw material and transport costs, clouding its prospects for this year despite strong demand.

The warning echoes comments from rival Siemens Gamesa, whose shares fell as much as 16% on Friday after it cut its outlook for the third time in nine months, also citing a surge in costs for vital materials such as steel.

Companies from utilities and chemicals makers to telecoms firms and supermarkets are raising prices due to a cocktail of factors including rising energy costs and supply bottlenecks, raising the prospect of interest rate rises to curb inflation.

Despite record-high demand driven by the green transition, profit margins at wind turbine makers such as Vestas and Siemens Gamesa have been squeezed by high costs, as well as increasing competition.

“(We) expect the current challenging business environment to continue throughout 2022, which hampers our outlook for 2022,” Vestas CEO Henrik Andersen said in a trading statement.

“To mitigate these short-term challenges, the industry must show the discipline needed to protect profitability and improve value creation in the long term,” he said, adding raising prices was a “necessity.”

Vestas’ shares have fallen 41% since a peak in late October. On Wednesday, they fell nearly 5% at opening but were trading 4.7% higher at 0900 GMT.

Vestas said this year would be “heavily impacted by cost inflation” and forecast revenue in a range of 15-16.5 billion euros ($16.9-18.6 billion), and an earnings before interest and taxation (EBIT) margin before special items of 0%-4%.

Last year, revenue stood at a record 15.6 billion euros, at the low end of guidance in November of 15.5-16.5 billion. Vestas’ 2021 EBIT before special items was 461 million euros, indicating an operating profit margin of 3% versus guidance of around 4%.

The company is due to publish a full set of earnings on Feb. 10.