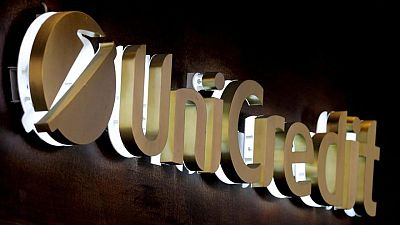 MILAN -UniCredit is unlikely to pursue a deal for Moscow-based lender Otkritie Bank, a source familiar with the situation said on Monday after Russian daily Kommersant reported that Italy’s second-biggest bank had lost interest.

UniCredit, which has been operating in Russia since 1989, accessed Otkritie’s books earlier this month with a view to possibly taking on parts of its business, sources had said.

A three-week analysis of Otkritie’s financial data is due to conclude at the end of January. Russia’s central bank is looking to divest the lender through a sale or a public listing after rescuing it in 2017.

However, Russian business daily Kommersant reported on Monday that UniCredit, which has been led since April by Chief Executive Officer Andrea Orcel, was no longer interested in doing a deal.

The person close to the matter confirmed this was set to be the outcome of the due diligence analysis being carried out.

After initially rising on the report, UniCredit shares were down 2.4%, although they were still outperforming the wider Italian banking sector, which was down 3.0%.

“This is bang in line with our thoughts. Geopolitical tensions between Russia and NATO are material and we believe that an expansion into Russia is the last thing that Orcel has in mind,” Bestinver analyst Fabrizio Bernardi said.

“We believe that the only reason why UniCredit was mentioned to have an interest … is that the bank is for sale and UniCredit already has a presence in Russia so it was invited to see the M&A dossier and increase the number of potential bidders.”

News of UniCredit’s possible interest had irked markets, with analysts saying the benefits of a merger would not offset higher risks given geopolitical tensions.

UniCredit, Italy’s only bank deemed of systemic relevance by regulators, is due to publish full-year results on Friday, opening the reporting season for domestic lenders.

Analysts expect a 1.15 billion euro fourth-quarter loss due to restructuring charges the bank will book under a new strategic plan Orcel unveiled in December, a consensus published on UniCredit’s website on Friday showed.