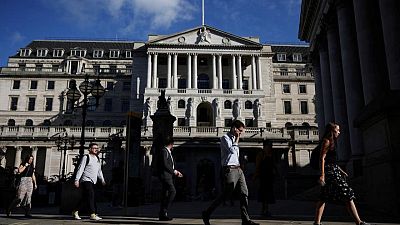 LONDON – The Bank of England will press ahead with its tightening cycle next month as red-hot inflation runs well ahead of target and the economic threat from the Omicron coronavirus variant should prove milder than previous mutations, a Reuters poll found.

Britain’s central bank became last month the first major rate-setter to increase interest rates since the coronavirus pandemic began, surprising markets and many economists who had expected a delay.

The central bank said at the time it had to act, even as the Omicron variant swept Britain, because it saw warning signs in underlying inflation pressures.

Inflation, reported on Wednesday at a near 30-year high in December, will peak next quarter before starting to decline in the third quarter and won’t reach the BoE’s 2% target until the second quarter of next year, the poll found, adding pressure on the central bank to act.

Median inflation forecasts for this quarter and next jumped to 5.2% and 5.5% in the latest poll, which was released on Friday, from 4.7% and 4.6% in the one released in December.

“Inflation has surprised higher, again, and that’s only likely to increase the temptation for Bank of England policymakers to hike rates for a second consecutive meeting this February,” said James Smith at ING.

Markets are pricing in around an 85% chance of an increase in the BoE’s main interest rate to 0.50% next month.

British consumers face the added headache of an estimated 50% increase in energy costs in April alongside an increase in social security contributions.

Almost 65% of respondents in the Jan. 17-20 poll expected a 25-basis-point rate increase from 0.25% when the BoE’s Monetary Policy Committee meets on Feb. 3 while the proportion expecting a rise to 0.50% by the end of March was more than 75%.

Median forecasts showed the BoE hiking its main interest rate by another 25 basis points in the third quarter – a quarter earlier than predicted last month – but it will then wait until early next year before raising it again, to 1.00%, also earlier than previously expected.

When asked how high that rate would go in the current cycle, the median response was 1.50%, still an historically low level.

Britain’s economy surpassed its pre-pandemic size https://www.reuters.com/world/uk/uk-economy-finally-bigger-than-before-pandemic-november-2022-01-14 in November, official data showed last week, although some of that momentum was probably lost as people stayed home ahead of the holiday season to ensure they were healthy for Christmas celebrations.

Shopper numbers https://www.reuters.com/business/retail-consumer/uk-shopper-footfall-central-london-drops-30-versus-last-week-2021-12-24 in central London on Christmas Eve were 30.3% lower than on the previous Friday, according to data from Springboard.

Prime Minister Boris Johnson, who faces growing calls to step down over a series of scandals, took a light touch approach in dealing with Omicron, stopping short of imposing the strict measures during previous waves. On Wednesday he announced the end of most COVID-19 limitations.

So when asked what impact the Omicron variant would have on the economy compared to the Delta variant, all but three of 24 respondents to an additional question said it would be milder or much milder.

“As we head into the spring I imagine confidence will be supported by the fact COVID-19 cases will be somewhat lower and we have an entire economy of people who want to go out and spend money,” said George Buckley at Nomura.

“It suggests we will see an increase in consumer spending, particularly services spending, as we stop buying stuff and start buying experiences.”

(For other stories from the Reuters global economic poll:)