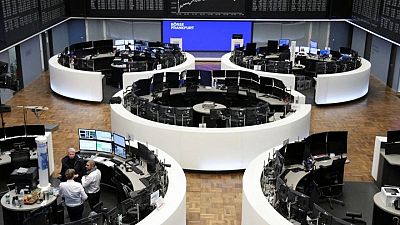 – European shares ended higher on Thursday with travel stocks leading gains after Ryanair expressed confidence in a recovery this year, while bond yields retreated from recent peaks, taking some pressure off equities.

The pan-European STOXX 600 closed up 0.5%, overcoming early losses and extending a recovery into a second consecutive session.

Broader European equities benefited as German bond yields dropped back below 0%, retreating from a series of strong gains this week. [GVD/EUR]

Utility and technology stocks rose 1.7% and 1.5%, respectively. The two sectors usually tend to underperfrom in high-rate environments, and have fallen substantially this year.

The broad STOXX 600 index has struggled for direction this week as investors fretted over soaring inflation and eventual policy tightening this year. Positive earnings updates and commodity-linked gains, however, aided sentiment.

Still, European Central Bank head Christine Lagarde said inflation in the region would ease gradually over the year, given that its main drivers- surging energy prices and supply bottlenecks- were expected to subside.

“With the price of oil and gas so high, and consumers under pressure, the threat of even higher prices will be making great big clanging noises in investors’ ears,” Hewson said.

Among other stocks, Unilever fell 0.5% after it said it would not raise its 50 billion pound ($68 billion) offer to buy GlaxoSmithKline’s consumer healthcare business, which GSK previously rejected.

Deliveroo rose 1.4% after reporting a 36% year-on-year jump in the gross value of orders on its platform in the fourth quarter, and as the food delivery company hit the top of its guidance range with a 70% rise for the year.