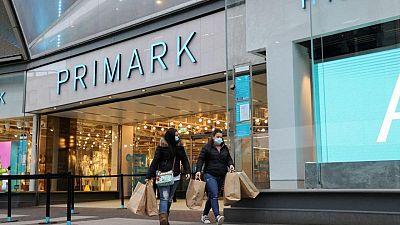 LONDON -Associated British Foods said on Thursday the lifting of COVID-19 restrictions in England had boosted prospects for its Primark clothing business after December sales were dented by the rapid spread of the Omicron coronavirus variant.

The group said Omicron had interrupted an improving trend in Primark’s customer numbers but it was now seeing a recovery in UK and Ireland footfall.

“In the UK and Ireland I think we’re looking at an improving consumer outlook,” John Bason, AB Foods’ finance chief, told Reuters, pointing to falling COVID-19 infection rates and the end of restrictions in England.

He said he expected Primark’s city centre stores to get a boost from workers returning to offices, while the business would also benefit from more people planning holidays.

Bason also pledged that, unlike rivals such as Next, Primark would not raise prices for spring/summer stock despite inflationary cost pressures.

He said a plan to improve efficiency in Primark stores would result in the loss of about 400 management jobs.

Primark trades from 401 stores in Europe and the United States but does not have an online business.

Its sales for the 16 weeks to Jan. 8 were 2.67 billion pounds ($3.64 billion). On a constant currency basis that was 36% ahead of last year when there were widespread closures of its stores in the UK and Europe.

While sales were 5% lower than pre-COVID levels in the same period two years ago, its operating profit margin was ahead of management expectations.

All Primark stores remained open throughout the period, except for short periods in Austria and the Netherlands, which cost it 30 million pounds of sales.

AB Foods also owns major sugar, grocery, ingredients and agricultural businesses, where revenue in aggregate was 6% ahead of last year.

The group said all businesses had experienced inflationary pressures in raw materials, commodities, supply chain and energy. That has impacted margins in grocery and ingredients where price rises have lagged the effects of input cost inflation.

However, the group still maintained its guidance for “significant progress”, at both the half and full year, in adjusted operating profit and adjusted earnings per share.