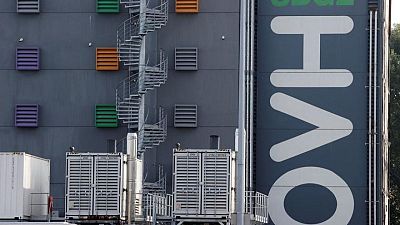 -OVHcloud aims to capitalise on the exponential growth in the global cloud market, the French cloud services provider said on Wednesday after its first-quarter revenues beat market expectations on the back of strong customer gains.

The group, which made its market debut in October in one of Paris’ biggest new listings of 2021, said recent signings of new customers like EDF Renewables and HarfangLab confirmed its relevance as a “trusted alternative” in the industry.

As the emphasis on data security and privacy rises, analysts see OVHcloud’s positioning as increasingly pertinent to tap into demand for data sovereignty cloud solutions.

“There is a new momentum for new regulations,” chief executive Michel Paulin said in a call. “OVHcloud is uniquely well-positioned to propose alternative solutions against most of the hyperscalers.”

The group reported a 13.9% rise in its first-quarter revenue to 187.2 million euros ($212.9 million), ahead of analysts’ average estimate in a company-compiled consensus, according to J.P. Morgan.

The brokerage said the highlight of the report was OVHcloud’s higher client retention, with a 112% revenue retention rate (NRR) over the quarter compared to 100% reported for the 2021 fiscal year ended August.

The company – which was admitted to SBF 120 index less than two months after its initial public offering – maintained its 2022 objectives, with revenue growth expected in the upper half of its initial 10% to 15% target range and a core profit margin at about 40%.

“We believe that the company has left itself room to upgrade this guidance if NRR metrics stay at, or continue to improve from, current levels,” J.P. Morgan said.

OVHcloud shares were up 4.7% at midday after rising as much as 7.4% in early trading.