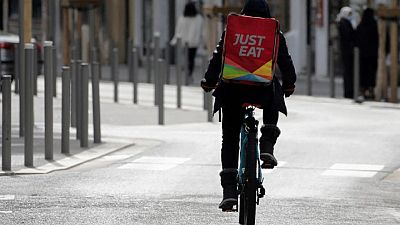 AMSTERDAM – Just Eat Takeaway.com, Europe’s largest meal delivery company, reported a 14% increase in orders in the fourth quarter on Wednesday in line with expectations and maintained its financial forecasts for 2022.

In a trading update, the company said it had delivered 273.7 million orders in the fourth quarter of last year, up from 240.4 million in the same period of 2020.

Chief Executive Jitse Groen repeated that Takeaway expected orders to increase and losses to fall in 2022 but stopped short of forecasting it would break even on an operating basis this year, unlike German rival Delivery Hero which said on Tuesday it would do so in the second half.

“We’re not targeting profitability, we’ve given out a slight loss range for this year,” Groen said.

Takeaway has come under pressure from investors to sell operations, including U.S. subsidiary Grubhub, to reduce its operating losses as the boost it received from increased orders during the COVID-19 pandemic has begun to fade.

After rapid growth during the pandemic, European food delivery firms such as Takeaway, Deliveroo and Delivery Hero are bracing for consolidation and more competition from a new generation of fast grocery and delivery companies.

Groen said losses would be driven by continued investment in its delivery network in Britain, where it owns Just Eat.

He said the company was continuing to negotiate over the sale of its one-third stake in iFood, Brazil’s largest meal delivery company.

On Grubhub, which has lost market share since Takeaway bought it for $7.3 billion in June last year, he said: “We are open to improvements … that can be a partner and it can be something else that improves that business.”