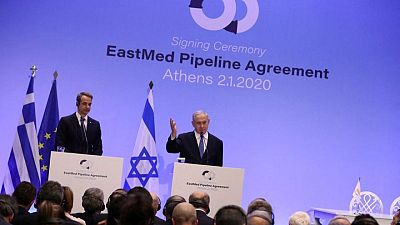 ATHENS -The United States has expressed misgivings on a subsea pipeline designed to supply Europe with natural gas from the eastern Mediterranean, Greek government sources said, in an apparent U-turn over a project supported by the former Trump administration.

Washington, under the Biden administration, let its concerns be known recently, in a note sent to Greece, another source said.

Competing claims over gas reserves in the eastern Mediterranean are a point of tension between Turkey and ethnically-split Cyprus. Turkey opposes the pipeline project.

Greece, Cyprus and Israel have approved an agreement for the EastMed pipeline, which has been in planning for several years. The countries had aimed to reach a final investment decision this year and have the 6 billion euro ($6.82 billion) scheme completed by 2025 to help Europe diversify its energy resources.

“The American side expressed to the Greek side reservations as to the rationale of the EastMed pipeline, (and) raised issues of its economic viability and environmental (issues),” one source said.

There was no immediate comment from Israel or Turkey.

Concerns about the financial viability of the project have been heard before, but Greece, Israel and Cyprus have supported the project.

Ankara has repeatedly said that any plans in the eastern Mediterranean that exclude it were bound to fail and that it would defend its rights in the region. It has also opposed the EastMed project, saying the plan could not work without Turkey’s approval.

Reports of the United States having reservations over the pipeline were first published in Greek media.

They stand in contrast to comments in December 2020 by then-U.S. Energy Secretary Dan Brouillette that the United States would continue to work with interested parties to “ensure that the infrastructure will be developed”.

Greece, the official said, had taken note of Washington’s views.

“The Greek side highlighted that this project has been declared a ‘special project’ by the European Union and any decision on its viability will logically have an economic impact,” the official said.

Touted as an alternative to help ease Europe’s dependence on Russian gas, the 1,900-km (1,180-mile) project is expected to initially carry 10 billion cubic metres of gas a year to Europe.

The United States, the official said, believed priority should be given to interconnecting the electricity grids of countries in the region.