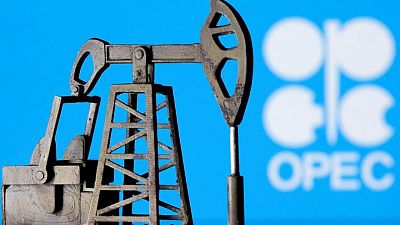 -Oil rose to nearly $84 a barrel on Tuesday, supported by tight supply and expectations that rising coronavirus cases and the spread of the Omicron variant will not derail a global demand recovery.

A lack of capacity in some countries has meant that supply additions by the Organization of the Petroleum Exporting Countries (OPEC) are running below the increase permitted under a pact with its allies. [OPEC/O]

On the demand side, Federal Reserve Chair Jerome Powell said on Tuesday he expects the economic impact of Omicron to be short-lived, adding that ensuing quarters could be very positive for the economy after the surge driven by the variant subsides.

“Combination of facts – that demand is going to be stronger than anticipated and that OPEC‘s supply may not grow as fast as the demand – is why prices are climbing,” said Phil Flynn, senior analyst at Price Futures Group.

Major economies have avoided a return to severe lockdowns, even as COVID-19 infections have soared. European jet fuel refining margins, for example, are back to pre-pandemic levels as supplies in the region tighten and global aviation activity recovers despite the spread of Omicron.

“Omicron has yet to wreak the havoc of the Delta variant and may never do so, keeping the global recovery on track,” said Jeffrey Halley, analyst at brokerage OANDA.

The U.S. government on Tuesday also estimated that U.S. oil output would be lower this year than previously expected, while total oil demand would be higher than earlier forecast.

Brent rose by 50% in 2021 and has rallied further in 2022, with investors expecting increasing demand while OPEC and its allies, collectively known as OPEC+, slowly ease record output cuts made in 2020.

Recent outages in Libya have also buoyed prices, and the National Oil Corp said on Tuesday it was suspending exports from the Es Sider terminal.

A weaker U.S. dollar also helped to support oil because it makes oil cheaper for buyers holding other currencies and tends to reflect higher risk appetite among investors.