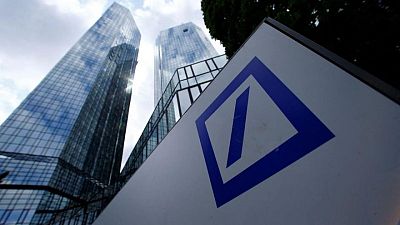 By Alexander Hübner and Christoph Steitz

FRANKFURT – U.S. financial investor Cerberus, which has favoured a merger of Deutsche Bank and Commerzbank in the past, on Monday divested a large chunk of its holdings in the two top German lenders, the bank running the sale said.

The sale marks a significant scaling back by one of the most prominent investors in the financial sector of Europe’s largest economy and comes at a time when large-scale consolidation in the continent’s banking sector is still waiting to happen.

Cerberus, which until now held around 3% of Deutsche Bank and 5% of Commerzbank and had ranked among the top-10 shareholders of both banks, sold 21 million Deutsche Bank shares and 25.3 million Commerzbank shares, Morgan Stanley said.

Cerberus, which took stakes in both banks in 2017, fetched 443 million euros ($502 million) in the sale, Morgan Stanley said, a roughly 3% discount to Monday’s closing price.

The divestment reduces Cerberus’ stake in Deutsche Bank to around 2%, and its stake in Commerzbank to 3%.

Cerberus has committed to a 45-day lock-up period during which it will not sell additional stakes, Morgan Stanley said.

Deutsche Bank and Commerzbank shares were down 1.9% and 4.9% respectively in after-hours German trading following the news.

Cerberus has at times been a vocal investor, demanding changes at Commerzbank in 2020 that prompted a management reshuffle as well as substantial job cuts.

Since Cerberus bought its stakes, shares in both lenders are down more than 20%.

The investor did not respond to requests for comment.