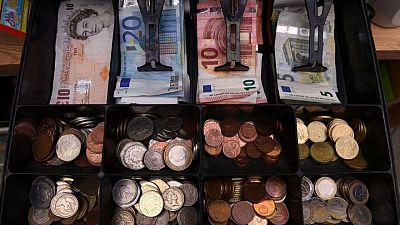 -Sterling was mixed on Monday after hitting new highs against the euro and the dollar amid rate rise expectations and easing fears about the economic impact of the Omicron variant.

Analysts said the currency has strengthened since mid-December as UK government resistance to further COVID-19 restrictions provided a much-needed boost to sentiment.

Britain has focused on rolling out booster vaccinations – which have reached more than 60% of the population – rather than requiring a return to lockdown measures.

Meanwhile, investors have ramped up expectations that the Bank of England will raise interest rates as early as next month after a surprise hike in December.

“We are looking for a decent November UK GDP release tomorrow of 0.4% month over month, which should keep expectations alive of a further Bank of England rate hike on February 3,” ING analysts said, recalling that overnight indexed swap (OIS) market prices an 80% chance of a 25 bps hike.

A preliminary estimate of UK gross domestic product for November is due on Tuesday.

But analyst views are mixed on the medium-term outlook.

“We remain negative on sterling. The UK economy is lagging the rest of the world, and activity is still one percent below pre-Covid levels,” Luca Paolini, chief strategist at Pictet Asset Management said.

“We don’t expect three or four more hikes in 2022, which is what the market is currently discounting,” he added.

The pound entered 2022 “with a tailwind of cautious optimism; the market will be looking closely at Omicron data, and any immediate indication of Liz Truss’s focus areas, as an indication of the tone taken by the Bank of England in Q1,” Joe Tuckey, forex analyst at Argentex said.

Truss said ahead of talks with the European Union over post-Brexit trade arrangements that the United Kingdom is ready to take unilateral action to suspend customs checks on goods moving to Northern Ireland.