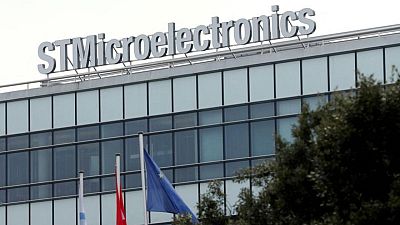 PARIS -Franco-Italian chipmaker STMicroelectronics said its preliminary fourth-quarter revenues were slightly above the guidance given at the end of October, in the context of a global microchip supply crunch, which gave a lift to its shares.

STMicroelectronics’ Paris-listed shares rose by around 3% in early session trading.

STMicro’s update outlook echoed that of its peer Samsung Electronics, which on Friday said its fourth-quarter operating profit likely jumped 52% on-year to its highest for the quarter in four years, helped by solid demand for server memory chips and higher margins in chip contract manufacturing.

“We ended the fourth quarter of 2021 with net revenues above the outlook range and gross margin at, or slightly above, the high-end of the outlook range, primarily due to betterthan anticipated operations in an ongoing dynamic market”, said STMicroelectronics president and CEO Jean-Marc Chery.

“Our FY21 revenues (…) reflect a strong performance across all the end markets we address and our engaged customer programs throughout the year”, he added in a statement.

The global microchip shortage has forced automakers and electronics companies to cut production and bottlenecks in the chip industry are expected to affect output until 2023, several analysts have said.

STMicroelectronics, whose Paris-listed shares rose 43% in 2021, will publish its detailed Q4 2021 earnings on Jan 27.