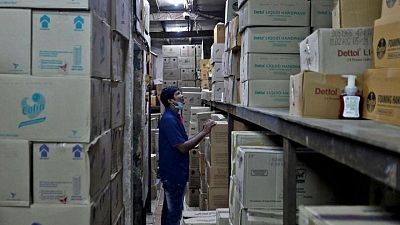 NEWDELHI -British consumer giant Reckitt Benckiser sought to allay the concerns of its army of sales agents in India about unfair pricing, saying it had taken steps to ensure a level playing field for distributors, a letter seen by Reuters showed.

The assurance followed a Reuters story in November https://reut.rs/3FAVZKK that revealed sales agents of companies including Reckitt, Unilever and Colgate were angry that mom-and-pop stores – known as kiranas in India – increasingly ordered from Indian retailer Reliance’s mobile app because they could get lower prices.

In a letter dated Dec. 20 to a key trade group of 400,000 consumer goods sales agents, Reckitt said it had taken steps to ensure “equitable play” for all its business partners as it seeks to resolve their concerns.

There are hundreds of thousands of consumer goods distributors who go store-to-store in India to take orders from kirana outlets and they are key to the success of companies like Reckitt in trying to reach the population of 1.3 billion.

The agents said the companies risked supply disruptions https://reut.rs/330TaVf if they did not ensure pricing parity for all distributors.

“We have been extremely careful and discourage any unsustainable businesses with alternate distribution channel partners,” Reckitt said in the letter to the All India Consumer Products Distributors Federation (AICPDF).

“Any violation is immediately flagged off and stopped,” it added, without naming Reliance or any other big distributor.

Reckitt – the maker of popular brands like Dettol and Durex – didn’t comment on the letter, but in a statement to Reuters said India is one of its top three markets and it was in constant dialogue with distributors to maintain an equitable relationship with all of them.

“Our distributors have always been an integral part of our business,” the statement said.

AICPDF‘s President Dhairyashil Patil said it is “going by the company’s words” for now and hopes Reckitt will be able to ensure a level playing field.

Reliance, headed by billionaire Mukesh Ambani, has longstanding relationships with consumer product firms like Reckitt as it also runs 1,100 supermarkets in the country.

Jefferies last year estimated kiranas will “steadily increase the share of procurement” from Reliance “at the cost of traditional distributors”. Such sales for Reliance could mushroom to $10.4 billion by 2025 from just $200 million in 2021-22, Jefferies estimates.