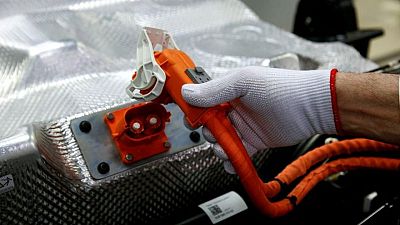 Goods orders rose 3.7% on the month in seasonally adjusted terms after a revised drop of 5.8% in October, figures from the Federal Statistics Office showed on Thursday. A Reuters poll of analysts had pointed to a 2.1% rise.

The rise was driven by a surge in foreign demand for capital and intermediate goods, with orders from other euro zone countries jumping 13.1% and bookings from clients outside the single currency bloc up 5%.

“This provides a positive impetus for the economic outlook, although economic activity continues to be burdened by existing delivery bottlenecks,” the economy ministry said.

In contrast to previous months, orders for large-ticket items such as planes did not have a big impact on the headline figure in November. Excluding this special factor, industrial orders rose 3.8% on the month, the ministry said.

In the medium term, business prospects for companies manufacturing industrial machinery look bright in light of the shift towards a greener and more digitalised economy.

“The ecological restructuring of industry and the wave of digitisation are good news for German manufacturing,” VP Bank economist Thomas Gitzel said.

The government’s plans to hike public spending and support private investments in the expansion of renewable energy sources and the reduction of carbon emissions through green hydrogen will give engineering companies a push, Gitzel said.

“Despite short-term setbacks, the order books will remain well filled for the coming years,” he said.