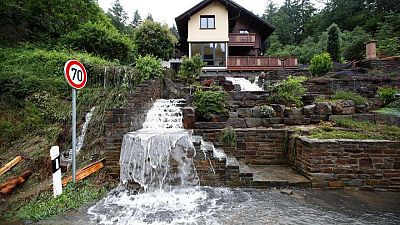 LONDON – Some European property reinsurance rates rose by more than 50% at Jan. 1 renewals after the region suffered record insured losses last year from natural catastrophes such as floods and storms, a report by broker Gallagher Re showed on Tuesday.

Flooding in July in Germany and other countries including Austria, Belgium and Switzerland caused over 12 billion euros ($13.55 billion) in insured losses, Gallagher Re said in the report on renewals on one of the most important dates in the reinsurance calendar.

In areas hit by natural catastrophes, reinsurance rates in Germany rose by between 15% and more than 50%, with the same rate rises in Europe as a whole. In Switzerland, such rates rose between 20% and over 50%.

“Reinsurers have managed to achieve further improvements in pricing to build on the increases of the past 18 months,” said James Kent, global CEO of Gallagher Re.

Some reinsurers cut their exposure to the region, Gallagher Re said.

In the United States, which last year suffered a major winter storm as well as wildfires, hurricanes and tornadoes, rates rose 10-25% for catastrophe-hit areas.