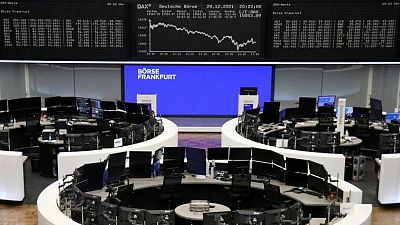 – European shares ended at all-time highs on Monday, starting the year in an upbeat mood on hopes of steady economic recovery despite a surge in COVID-19 cases due to the Omicron variant.

The benchmark surged 22.4% in 2021, its second-best yearly performance since 2009, as economic stimulus measures, earnings growth and vaccine rollouts encouraged investors to pour money into the stock market.

“Although COVID-19 variants permeated the global economy, 2021 was the year of records with many bourses closing at or near record highs, while inflows into equities surpassed their largest accumulation ever ($928 billion),” said Sean Darby, global equity strategist at Jefferies.

“Peering into 2022, we expect volatility to rise.”

Stock indexes in Germany, France, Italy and Spain were up between 0.5% and 1.4%, while London markets were closed.

Automakers led gains among European sectors with a 2.4% rise, following a slew of positive production reports and annual targets from global vehicle makers, including Hyundai and Tesla.

Banking stocks gained 0.9%, tracking a rise in euro zone government bond yields. They were the best performing European sector in 2021, as a surge in inflation pushed traders to price in faster monetary policy tightening across the globe.

Planemaker Airbus rose 3.4% after sources said it had provisionally exceeded its target of 600 jet deliveries in 2021.

Lufthansa jumped 8.9% after Citi upgraded the stock to “buy” from “sell,” expecting the German airlines to benefit from the reopening of Asian routes, particularly China.

Air France KLM gained 4.9% as the brokerage upgraded the stock to “neutral”.

A survey showed factory activity in the euro zone remained resilient in December, as factories took advantage of supply chain issues easing and stocked up on raw materials at a record pace.

While coronavirus cases saw a rapid increase in several parts of the world, investors were largely relieved by signs the Omicron variant is milder than the Delta one.

Italian truckmaker Iveco Group plunged 10.2% in its first day of trading on the Milan bourse, after it was spun off from CNH Industrial.