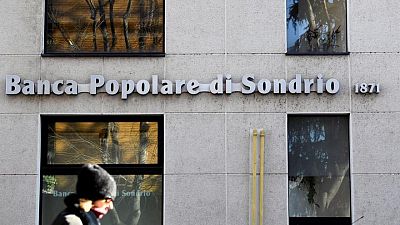 MILAN – Italy’s Banca Popolare di Sondrio is open to exploring all options for its future, its CEO said on Wednesday after shareholders approved long-delayed governance changes that could open the mutual bank up to a merger.

Yet Mario Pedranzini stressed that, while M&A was an option, Popolare di Sondrio was a healthy lender that did not need a merger to grow and remain profitable.

“In the future we will … explore all the opportunities that the market can offer, which is not necessarily M&A,” he told journalists.

Nestled in the mountains north-east of Milan, Popolare di Sondrio is the last of 10 large mutual banks targeted by a 2015 government reform to yield to changes aimed at improving governance and making them more attractive to investors.

Under Italian rules, the mutual status gives shareholders one vote each regardless of the size of their stake, diminishing the appeal of stakebuilding. On Wednesday, investors in Popolare di Sondrio approved shedding the bank’s mutual status to turn it into a joint-stock company.

The mandatory changes were however put on hold pending the outcome of court cases brought by some mutual bank shareholders as well as consumer organisations. Once the appeals were thrown out, Popolare di Sondrio was given until Dec. 31 to adopt the changes.

While Popolare di Sondrio has long guarded its independence and local roots, it is viewed by analysts as a well-managed bank and a prime merger partner.

The bank is, for example, widely seen by bankers and analysts as a possible partner for bigger rival BPER Banca, whose top shareholder UnipolSAI is also an investor in Pop Sondrio with a 9.5% stake. The governance changes will allow UnipolSAI to wield an influence corresponding to the size of its stake.

Popolare di Sondrio Chairman Francesco Venosta said the bank was not in any M&A talks and did not consider UnipolSAI a “privileged” party in such discussions, although he welcomed recent UnipolSAI head Carlo Cimbri’s comments.

Cimbri said this month that BPER was “very well placed” if Popolare di Sondrio were to look for a merger.