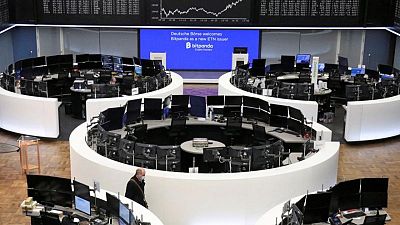 -European shares hit a one-month high on Thursday, led by gains in banking stocks as signs the impact of the Omicron variant may be less severe than feared led to improved risk appetite that pushed eurozone and Treasury yields higher.

Two vaccine makers said their shots protected against Omicron as UK data suggested it may cause proportionally fewer hospital cases than the Delta coronavirus variant, though public health experts warned the battle against COVID-19 was far from over.

Researchers from University of Edinburgh and Imperial College London reported evidence that the Omicron variant was less severe than the Delta coronavirus variant.

“The Omicron wave won’t derail the economic recovery that’s well underway, it might delay it, but 2022 will have an attractive, healthy economic environment,” said Philip Petursson, chief investment strategist at IG Wealth Management.

European government bond yields rose for the fourth consecutive session and benchmark U.S. Treasury yields rose to two-week highs as the trickle of risk sentiment back into the market reduced the need for safe-haven debt, helping push bank stocks higher.

“This year, economies reopened from 2020 lockdowns and benefited from all the fiscal stimulus. 2022 will be the path to normalisation of equity returns, interest rates and economic growth,” Petursson said.

AstraZeneca added to the positive sentiment after the drugmaker said a three-dose course of its COVID-19 vaccine was effective against the Omicron variant, citing data from an Oxford University lab study.

Flutter Entertainment rose 2.1% after announcing it would buy Italian online gaming operator Sisal for 1.62 billion pounds ($2.16 billion), as the online betting group looks to expand its footprint in Europe.

Continental AG added 2.5% after its CEO told a magazine that the German automotive supplier could hit the upper end of its profit margin outlook in 2021 as vehicle production picked up in the fourth quarter.