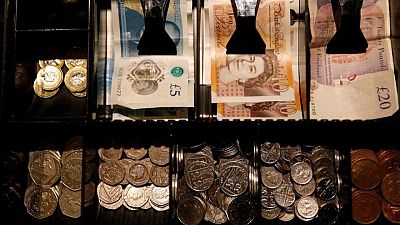 LONDON -Sterling rose against the dollar and edged up on the euro on Wednesday, despite official data showing Britain’s economy grew more slowly than previously thought before the recent Omicron variant-driven surge in COVID-19 cases.

Official data showed British gross domestic product grew by 1.1% in the third quarter between July and September, weaker than a preliminary estimate of growth of 1.3%.

The euro, Australian dollar and other currencies recovered against the U.S. dollar as traders turned more positive about the economic outlook on Wednesday.

The pace was also off the British economy’s 5.4% bounce-back in the second quarter when many coronavirus restrictions were lifted.

Investors are braced for a further slowdown due to a rise in COVID-19 cases that has hurt hospitality, leisure and retail businesses, while Prime Minister Boris Johnson’s government has said it can’t rule out further restrictions after Christmas.

Sterling was up 0.6% against the dollar at $1.3356. It jumped close to $1.34 after the Bank of England hiked interest rates hike last week, making Britain the first G7 country to raise rates since the start of the pandemic.

“We continue to believe that the UK rate market appears well priced at the current juncture for up to four BoE hikes next year,” currency analysts at MUFG said in a note.

“It provides a high hurdle for the pound to strengthen on the back of a hawkish repricing of BoE expectations in the near-term, especially as the worst of the new Omicron COVID wave is yet to be seen.”

Currency markets overall were muted on Wednesday, as volatility subsided in thin trading ahead of the holidays and after a flurry of central bank moves last week.