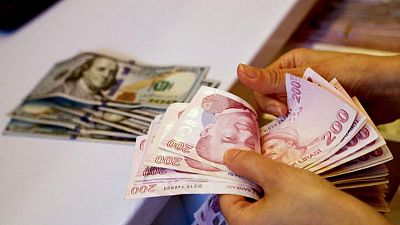 By Marc Jones and Tom Wilson

LONDON – The number of cryptocurrency trades in Turkey has surged back above one million per day as the country’s currency has plunged to a series of record lows, data shared with Reuters showed.

Worries about Turkey’s economic policy have seen the lira slump nearly 40% since September, driving Turks to look for places to park their savings to avoid the effects of soaring inflation.

The one million-a-day threshold – cleared according to data from blockchain analysis firms Chainalysis and Kaiko – was first surpassed earlier in the year when the sudden replacement of the country’s central bank chief in March triggered the lira’s first major slump of 2021.

But the number of trades had dropped back below 500,000, before the latest bout of lira volatility reignited interest.

Converting lira into U.S. dollars or gold is common for Turks, who have seen the currency lose 90% of its value since 2008. But with Ankara looking to make those practices harder, and cryptocurrency prices rising sharply this year, crypto trading has gained in popularity.

The data also showed that bitcoin and Tether, a “stablecoin” that aims to keep a steady value and which is widely used in crypto trading, have been most popular for lira trades since 2019.

Bitcoin hit a record high of $69,000 in November. A narrative that its limited supply makes it impervious to inflation – the coin is often seen as a store of value, despite its volatility – has helped to fuel its gains.

The rise in Turkey’s crypto trading is drawing attention from authorities, however.

Turkey’s deputy finance minister said in September that regulations on the emerging asset class would be introduced. Its central bank, meanwhile, banned crypto for traditional types of purchases in April, citing “irreparable” damage and transaction risks.