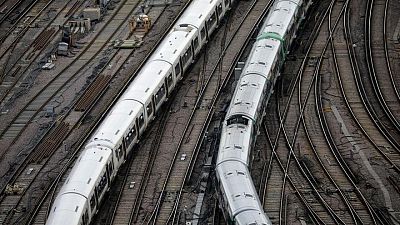 LONDON – Many British rail fares will rise by 3.8% from March, the government announced on Friday, reflecting a broader increase in the cost of living as inflation heads towards a 30-year high.

Price increases for around 40% of British rail fares are set by the government, affecting the cost of commuter season tickets, some long-distance off-peak return travel and peak travel near major cities.

Normally fares rise each January by 1 percentage point above the rate of retail price inflation in the previous July. RPI is a long-running measure but the Office for National Statistics says it overstates the true rate of price increases. The more accurate consumer price inflation measure was 2.0% in July.

For 2022 the government will limit the increase to July’s rate of RPI, which was 3.8%, and not apply the 1 percentage point extra increase. It will also delay the increase until March, as it did this year, when fares rose by 2.6%.

“Capping rail fares in line with inflation while tying it to the July RPI strikes a fair balance, ensuring we can continue to invest record amounts into a more modern, reliable railway, ease the burden on taxpayers and protect passengers from the highest RPI in years,” rail minister Chris Heaton-Harris said.

The Bank of England forecast on Thursday that consumer price inflation would peak at a 30-year high of around 6% in April, after hitting a 10-year high of 5.1% last month.