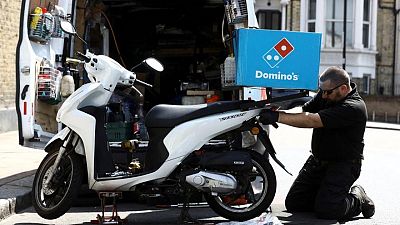 -Britain’s Domino’s Pizza Group has struck a deal with its franchisees in the UK and Ireland over profit sharing, ending more than two years of negotiations and sending its shares more than 20% higher.

The chain, a franchise of U.S.-based Domino’s Pizza Inc, will invest about 20 million pounds ($26.53 million) into the business as part of the agreement that is set to run for three years from Jan. 3.

The resolution includes renewed food rebates for franchisees, and requires them to open at least 45 new stores per annum over the next three years.

Domino’s UK said the deal received the support of franchisees representing over 99% of its UK stores, which total more than 1,100, its 2020 annual report https://investors.dominos.co.uk/system/files/uploads/financialdocs/2020-annual-report-web-edition.pdf showed.

The British chain had been struggling for years before the pandemic as it also sought to appease disgruntled franchisees.

“Despite a long history of strong performance, the Board recognises that in recent years DPG has lagged comparable Domino’s businesses around the world,” the company conceded, adding that the resolution unlocks an issue which held it back.

“We saw first-hand through the pandemic how, when we work together, we win together … the resolution … can unleash the power of the Domino’s brand,” CEO Dominic Paul said in a statement.

The chain has seen strong growth in the past year as pandemic restrictions led to a surge in demand for pizza deliveries, and outdoor dining was reopened as curbs were gradually eased.

However, the swiftly spreading Omicron variant could upend that growth, with Britain on Wednesday recording its highest number of new daily coronavirus cases https://www.reuters.com/world/uk/uk-reports-record-daily-covid-cases-with-omicron-spreading-rapidly-2021-12-15 since the start of the pandemic.

Still, the chain expects to reach at least the upper end of its medium-term target of 1.6 billion to 1.9 billion pounds in system sales, on hopes of a boost from the agreement.