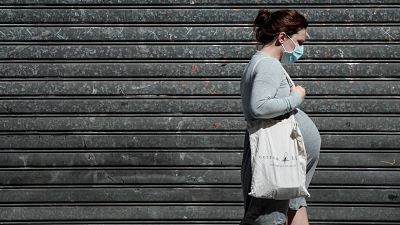 Pregnancies are more often affected by COVID-19, with a higher risk of premature births, a new French study shows.

Released on Tuesday by the Public Assistance Paris Hospitals (Paris AP-HP), France’s biggest university hospital, the study was led by a team of researchers from the Bichat Hospital and the Biomedicine Agency and published in the science magazine Plos Medicine.

They compared the risks of maternal morbidity in women diagnosed with and without COVID-19 and hospitalised before or during childbirth between January and June 2020 in France, during the first wave of the pandemic.

The rationale behind looking at this retrospective cohort was to evaluate to what extent “the risk of maternal morbidities and obstetrical adverse outcomes and COVID-19 diagnosis in pregnant women could be associated,” according to the study.

“We observed links between a diagnosis of COVID-19 and several maternal morbidities including premature births, pre-eclampsia (when increased blood pressure is associated with increased protein in the urine), haemorrhage at the time of delivery and caesarean births," the team said.

The findings are consistent with those in previous studies, showing a higher risk of pregnancy and childbirth disorders when the mother has contracted COVID-19.

For this study, researchers had access to data from the Programme de Médicalisation des Systèmes d'Information (PMSI), a tool that gathers data from every French hospital.

Among them, 5,832 deliveries were from in-vitro fertilisation (IVF), of which 0.27 per cent were diagnosed with COVID-19.

and rates of conception using assisted reproductive technique (ART) were similar between the two groups, the study flagged.

Another finding was that mothers-to-be who contracted the virus had to be hospitalised more often in intensive care (5.95 per cent vs. 0.08 per cent) and had a higher mortality rate (0.23 per cent vs. 0.005 per cent).

Finally, the proportion of preterm births taking place before 37 weeks - or eight and a half months - was twice as high in COVID-19 patients.

The study did not note any correlation between more frequent cases of stillbirths and mothers with the disease.

The limits of the study

While it examined a large data set, the study does have its limitations. By studying the situation of pregnant women afterwards, researchers couldn’t prove a direct causal link between COVID-19 and the problems encountered.

“Although causality cannot be established from our study, these findings raise the possibility that vaccination, which can be offered to pregnant women starting from the second trimester according to recommendations of several health authorities, may be useful to protect women from obstetrical excess risk, in particular in high-risk populations,” the research team concluded.

Another grey area concerned asymptomatic COVID-19 cases. Only patients with virus symptoms were classified as such. The study could not offer any conclusions on the higher risk of problems in COVID-positive but asymptomatic patients.

This work only looked at pregnancies that were already in their second trimester. The researchers were unable to determine whether there was a higher risk of miscarriage in early pregnancy.

Yet, the results of this study “may inform prevention and treatment policies for pregnant women with COVID-19,” researchers noted.

“In clinical practice, it appears essential to be aware of these complications, notably in populations at known risk of developing a more severe form of infection or obstetrical morbidities and in order for obstetrical units to better inform pregnant women and provide the best care”.

What is endometriosis and why do we know so little about it?