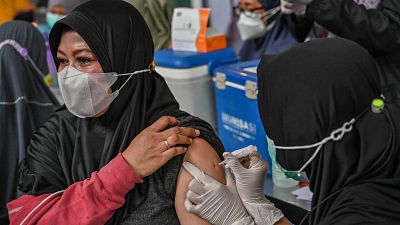 Two of the world's most commonly-used COVID vaccines may not provide enough protection from the Omicron variant without a third booster dose, a new study warned on Tuesday   -   Copyright  Juni Kriswanto / AFP
By Tom Bateman  with AP  •  Updated: 15/12/2021

Two major vaccines against COVID-19 do not produce "sufficient levels" of antibodies against the Omicron variant after two doses, researchers in Hong Kong said on Tuesday, adding to growing fears the variant may "escape" the protection offered by current vaccines.

The University of Hong Kong researchers recommended that individuals get a third dose of the Pfizer/BioNTech and Sinovac vaccines "as soon as possible," in order to ensure better protection against the rapidly-spreading variant.

In a test group of 25 fully-vaccinated Sinovac recipients, not a single person's blood serum contained enough antibodies to neutralise an Omicron infection.

Among a group of 25 double-jabbed Pfizer/BioNTech recipients, just five had sufficient neutralising antibodies, reducing the vaccine's efficacy to 20-24 per cent, the researchers said in the pre-print study released on Tuesday.

"Most individuals after [being] given two doses of the vaccine (either BioNTech or [Sinovac]) do not produce sufficient levels of serum antibodies against the new Omicron virus variant," the researchers said.

"The public is advised to get a third dose of the vaccine as soon as possible while awaiting for the next generation of [a] more matched vaccine".

The study - which has not yet been peer-reviewed - tallies with what vaccine makers Pfizer and BioNTech have said about their jab.

Last week, the companies said a third booster shot of their vaccine increased anti-COVID-19 antibody levels by up to 25 times, improving the odds of fighting off the new variant.

On Tuesday, new data from South Africa, where the Omicron variant was first detected, suggested the Pfizer/BioNTech vaccine offered just 33 per cent protection against infection by the variant, compared to unvaccinated people.

The data also showed the Pfizer jab offered 70 per cent protection against severe illness requiring hospitalisation, compared to a rate of 93 per cent during the country's last Delta variant surge.

Sinovac did not immediately respond to a request for comment from the Reuters news agency.

The Chinese-made vaccine, also known as Coronavac, is the world's most widely-used COVID-19 vaccine. Almost two billion doses have been distributed globally, particularly in poorer nations including Indonesia, Brazil, the Philippines and Turkey.

In Europe, the findings could pose a problem for authorities in Albania and Ukraine, where the Sinovac jab is one of the most commonly used COVID-19 vaccines.