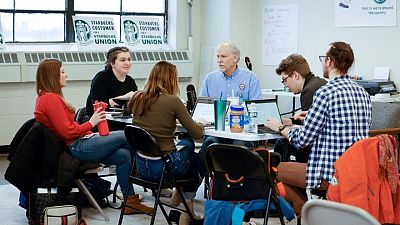 By Hilary Russ and Lindsay DeDario

BUFFALO, N.Y. -Starbucks Corp employees on Thursday voted to join a union at one store in Buffalo, New York, delivering the coffee chain its first unionized company-owned location in the United States. Workers at a second location in the city voted to reject the drive to organize.

Employees at one Starbucks location in Buffalo voted to join Workers United, an affiliate of the Service Employees International Union.

The vote count for a third store in the upstate New York city ended without a definitive result because a number of ballots were still under review, a process that could stretch into early next year, according to Ian Hayes, an attorney for the union.

“We will keep listening,” Rossann Williams, president of Starbucks North America, said in a letter to employees after the vote. “These are preliminary results with no immediate changes to our partner relationship as the NLRB process continues.”

The closely watched results come as Corporate America eyes new union organizing campaigns amid a U.S. labor shortage that has already led to higher wages at most large retailer and restaurant chains. Experts said the Starbucks results may encourage union activity at other companies.

E-commerce company Amazon.com Inc is facing a new election https://www.reuters.com/business/amazon-alabama-facility-ordered-re-run-union-election-us-labor-board-2021-11-29 at one of its Alabama warehouses after results of the previous election – which the union lost – were overturned last month.

The Buffalo election https://www.reuters.com/markets/commodities/starbucks-union-drive-spurred-by-barista-burnout-mobile-orders-2021-12-09 involved just over 100 workers altogether, a tiny fraction of Starbucks’ roughly 220,000 employees in its U.S. cafes.

Even so, the union victory could embolden other baristas to launch organizing drives at some of the company’s more than 8,000 other company-owned U.S. cafes. Already, three other Buffalo-area stores and one store in Mesa, Arizona, have petitioned the National Labor Relations Board to join the union.

“I am absolutely optimistic,” said James Skretta, a barista at one of the other New York stores to call for an election. “We feel as though this is validation for what it is that we’ve been doing.”

The outcome encourages Skretta to “withstand what we know will continue to be an aggressive anti-union campaign,” they said.

Shares of the Seattle-based company closed about 1% lower at $115.35 on Thursday.

Some local baristas had decried what they said were aggressive company tactics, including flooding Buffalo locations with executives, holding meetings with employees and even bringing in ex-CEO Howard Schultz to talk to workers and extol the virtues of existing wage hikes and benefits.

Starbucks denies that any of its actions amounted to union busting.

The company had several unionized cafes and a roastery in the United States the 1980s, but all eventually decertified. It beat back more recent organizing campaigns in Philadelphia and New York City. One location in Canada unionized in 2020.

In Buffalo, about 15 Starbucks employees who support the union drive gathered in a room to watch results. Many jumped, screamed and hugged when they realized they had enough votes to win the first store to be counted, on Elmwood Avenue.

The vote was 19-8 in favor of joining the union.

Baristas and shift supervisors from the second location on Camp Road voted 12-8 to reject the union. Hayes, the union’s lawyer, said during a news conference that the union will challenge those results.