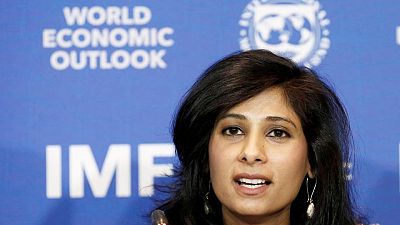 GENEVA -Central banks do not have the space to keep monetary policy loose and interest rates low, the International Monetary Fund’s chief economist said on Thursday, also warning that the pandemic could turn out far more costly than estimated.

Gita Gopinath, IMF chief economist, said that it had estimated that a more transmissible SARS-CoV-2 variant such as Omicron could cost the global economy a further $5.3 trillion, in addition to the current projected loss of $12.5 trillion.

She was speaking to an event organised by the World Health Organization (WHO) which seeks $23.4 billion for vaccines and other tools against the COVID-19 pandemic through the ACT (Access to COVID Tools) Accelerator, co-run with the GAVI Vaccine Alliance.

“We are now in the phase where countries around the world just don’t have the space to keep monetary policy very loose, to kind of keep interest rates extremely low. We are seeing inflationary pressures building up around the world,” she said.

“And so think of a situation where you could have this pandemic last longer, you have longer supply disruptions that are putting inflationary pressures, and then we have the real risk of something we have avoided so far, which is stagflationary concerns,” Gopinath added.

Concerns over Omicron, which the WHO says has been reported by 57 countries since it was first detected last month in southern Africa and Hong Kong, was “an obvious hit to recoveries everywhere in the world”, she said.

The IMF had simulated the case of what would happen if there were a more transmissible variant than Delta, she said, referring to the current dominant strain.

“Our projections are that that would add another loss of around $5.3 trillion to the global economy. So that is in addition to the current projected $12.5 trillion lost,” she said.