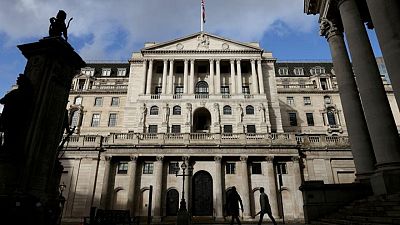 LONDON – The Bank of England faces a fresh decision next week on whether to become the first of the world’s major central banks to raise interest rates since the onset of the coronavirus pandemic.

The BoE shocked financial markets on Nov. 4 when its policymakers voted 7-2 to keep Bank Rate at 0.1%, even as it said inflation was heading towards 5%.

Many investors had read previous comments by Governor Andrew Bailey as meaning a November rate hike was extremely likely.

Since then, data has suggested the labour market withstood the end of the government’s furlough scheme – something the BoE wanted to see before any rate hike – and inflation hit a 10-year high of 4.2% in October.

But the emergence of the Omicron coronavirus variant has prompted some MPC officials to sound a new note of caution about the economy’s recovery, although Omicron could also add to inflation pressures by aggravating supply chain problems.

The BoE’s Monetary Policy Committee is due to announce its next policy decisions on Dec. 16 and Feb. 3.

Dec. 1: “Direct economic effects of COVID have attenuated a lot since the fall in GDP in the second quarter of last year, when we went off a cliff,” Bailey said. “However, there are still impacts that we are feeling from COVID quite strongly.”

Nov. 20: “You’re in a fairly febrile world…. (The inflation picture) is two-sided. There are risks both ways. Obviously, our concern would be that if it gets into second-round effects, it could be elevated for longer.”

Nov. 15: “I’m very uneasy about the inflation situation…. On the (November) decision itself, however, it was a very close call in my view…. I think that the situation in the labour market is looking considerably tighter.”

Nov. 26: “In my view, the ground has now been prepared for policy action…. Incoming data support the conclusion that the recovery is continuing. Although supply disruptions weigh on activity, they also create inflationary pressures. The labour market is tight.”

Dec. 3: “At present, given the new Omicron COVID variant has only been detected quite recently, there could be particular advantages in waiting to see more evidence on its possible effects on public health outcomes and hence on the economy. But continued delay also could be costly.”

Nov. 5: “That move in the UK (inflation expectations) above, and materially above, what was a relatively stable historical average, has been something I’ve been concerned about.”

Dec. 6: “The aggregate rate of inflation is likely to rise further over the next few months and the chances are that it will comfortably exceed 5% when the Ofgem (regulator) cap on retail energy prices is next adjusted in April.”

“It’s more likely than not – looking a couple of years ahead as we should – that these pressures on traded goods prices are more likely to subside than intensify.”

But Broadbent also said the jobs market could prove a source of inflation.

Nov. 24: “We’re learning about critical parts of the economy in coming months. My personal decision will be informed by that. I see myself as thinking more in, you know, (the) medium term.”

Nov. 23: Haskel said he was in “team transitory” on the question of inflation’s persistence. However, there was a risk that wage growth could exceed productivity growth, which has been weak in Britain for more than a decade.

July 14: “We’re seeing a surge in demand. We’re seeing some constrictions in supply that’s driving inflation. How persistent is that (is the) clear question… We would expect some of these pressures, and we would expect transitory pressures at this stage.”