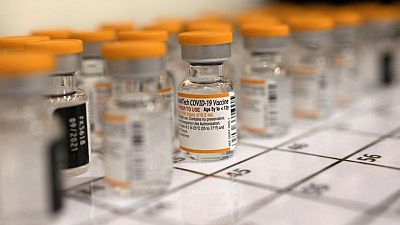 Re-infection risk may be higher with Omicron variant

Survivors of previous infection with the virus that causes COVID-19, known as SARS-CoV-2, may be at higher risk for re-infection with the Omicron variant than with earlier versions of the virus, according to preliminary findings. In South Africa, where Omicron was first reported, researchers reviewed data on nearly 2.8 million infections and saw that while the risk of a first infection rose when the earlier Beta and Delta variants spread during the pandemic’s second and third waves, the risk of re-infection was low and did not change. But last month, as Omicron spread, daily numbers of re-infections spiked, the researchers reported on Thursday on the website medRxiv https://www.medrxiv.org/content/10.1101/2021.11.11.21266068v2 ahead of peer review. Survivors’ risk for re-infection may be rising more quickly than an average person’s risk for a first infection, they said. SARS-CoV-2 infections are usually diagnosed without genetic sequencing to confirm the responsible variant, so this study cannot prove that Omicron is better able to evade the immune defenses put up by the body in response to a previous infection. Nor does it prove anything about defenses generated by vaccination. Still, the researchers said, the timing of the increase in re-infections “strongly suggests that they are driven by the emergence of the Omicron variant.”

A booster shot of the Pfizer/BioNTech COVID-19 vaccine appears to provide strong protection, at least in the short term, according to data from Israel. The odds of testing positive for the coronavirus were much lower in adults who received a third dose of the vaccine than in people who got their second dose more than five months ago, the data showed. Researchers with Maccabi Health Services reviewed data on PCR tests performed in more than 306,000 adults after the Pfizer/BioNTech booster dose became widely available. Roughly half the tests were done in people who had received a booster and half in people who had received only the standard two doses, with at least five months since the second dose. Overall, 1.8% of tests were positive in the booster group, versus 6.6% among those with only two doses, the researchers reported last week in the journal JAMA Internal Medicine https://jamanetwork.com/journals/jamainternalmedicine/fullarticle/2786890. After taking participants’ various risk factors into account, they estimated that between four and nine weeks after receipt, the third shot was associated with an 86% reduction in the odds of testing positive for the virus. Results were similar when the researchers compared subsets of closely matched recipients of two or three doses. The vaccine’s waning of protection over time “seems to be counteracted in the short-term by a third dose,” but longer monitoring is needed to see how long the protection will last, the researchers said.

The few pediatric recipients of COVID-19 vaccines who develop a heart muscle inflammation known as myocarditis are likely to have mild symptoms that improve quickly, according to a report published on Monday in the American Heart Association (AHA) journal Circulation https://www.ahajournals.org/doi/10.1161/CIRCULATIONAHA.121.056583. The rare side effect has been most often reported among adolescent and young adult males. Researchers reviewed data from 26 children’s hospitals across the United States and Canada, focusing on 49 patients ages 12 to 20 who were hospitalized for “confirmed” myocarditis within a month of receiving the vaccine, and 91 with “probable” myocarditis. Most (91%) were male, 66% were white, and the average age was about 16. While 19% required intensive care, no one died. Half of the patients were sent home within two days. While COVID-19-vaccine-related myocarditis is usually mild and usually resolves quickly, the condition is nevertheless “a cause of great concern,” and it is not clear yet how patients do over the long term, the researchers said. Still, they concluded, “its risk must be balanced against critical illness and cardiovascular involvement” associated with COVID-19. In a press statement, AHA President Dr. Donald Lloyd-Jones, who was not involved in the study, said that data has shown that the benefits of COVID-19 vaccination “far exceed the very rare risks of adverse events, including myocarditis.”