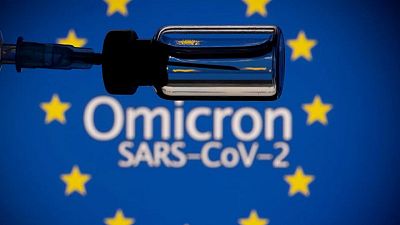 The Omicron variant has increased concern among some economists that more lockdowns could be in store, which could lower growth after this year’s roller-coaster ride.

But the ministers were less concerned.

“The euro area economy is recovering from the recession faster than expected,” the ministers, called the Eurogroup, said in a statement, citing the latest European Commission forecasts for GDP growth of 5% in 2021 and 4.3% in 2022.

The economy of the 19 countries sharing the euro is likely to return to pre-pandemic levels by the end of the year in quarterly terms, though the recovery would be uneven across countries and sectors, the ministers said.

“Moreover, the level of uncertainty is particularly high, risks are substantial and new headwinds to the economic outlook have emerged,” they said.

This echoed a regular assessment of the euro zone economy by the International Monetary Fund, released on Monday. The IMF said the euro zone was recovering rapidly thanks to high vaccination levels and continued forceful policy support, but headwinds might force it to modestly revise downwards its growth prospects in the January forecast.

To counter the uncertainty, the euro zone would keep pumping cash into the economy, even though, to some extent, it has learned to adapt to the pandemic and has grown more resilient.

“The Eurogroup agrees that a moderately supportive fiscal stance in the euro area for 2022 is appropriate … in the near term, also in light of the downside risks, which remain pronounced and some have already started to materialize,” the statement said.

The ministers noted that the policy support should be targeted at specific sectors, rather than for all, and that high-debt countries like Italy or Greece had much less room for manoeuvre with budget spending.

The ministers brushed off as temporary the sharp acceleration in euro zone inflation, which hit 4.9% year-on-year in November, echoing the European Central Bank, the Commission and the IMF, which all said there were so far been no second round effects of inflation on wages.

“The Eurogroup acknowledges the view of the institutions that heightened inflation is expected to be transitory and inflation expectations appear well-anchored,” the ministers’ statement said.