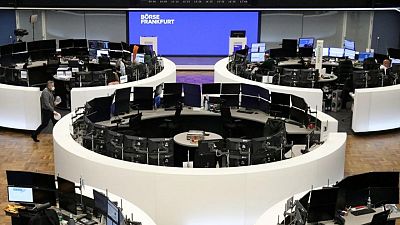 – Travel stocks helped European shares mark a strong start to the week on Monday, after sharp losses late last week, boosted by hopes that the Omicron variant of the coronivirus would be mild.

After marking its third straight week in the red, the pan-European STOXX 600 closed up 1.3%. The technology index was the only sector in the red, down 0.5%, tracking U.S. peers. [.N]

Some concerns about the Omicron variant were eased after a South African health official said the strain caused mild infections, while top U.S. infectious disease official Anthony Fauci told CNN, “it does not look like there’s a great degree of severity” so far.

That saw travel and leisure stocks rejoice, with the index surging 3.9% and posting its best session since May.

“Last week’s losses are likely to be taken back this week if people see that Omicron isn’t as deadly as previous mutations, and as the European Central Bank remains wedded to their transitory inflation line,” said Stuart Cole, head macro economist at Equiti Capital.

As oil climbed by $2 a barrel towards $72, the energy sector rose 1.9%. Industrial stocks were led higher by Airbus after Saudi Arabian Military Industries signed an agreement with the planemaker to form a joint venture specialised in military aviation services. [O/R]

Roche rose 1.5% after the European Union’s drug regulator recommended extending the use of the drugmaker’s RoActemra arthritis drug for adult COVID-19 patients.

Investors are also watching out for key U.S. inflation figures later this week that could settle the path for an interest rate hike by the Federal Reserve.

“We are still ‘overweight’ on equities… We expect new virus variants to delay, but not derail, the restart and see (Fed’s) policy rates rising only modestly,” BlackRock Investment Institute said in a note.

But, a survey showed investor morale in the euro zone deteriorated in December to reach its lowest level since April.

Italy’s benchmark FTSEMIB gained 2.2% after Fitch upgraded the country’s credit rating to “BBB“ from “BBB-” as it expects the economy to expand after reopening from the pandemic-led lockdowns.

Just Eat Takeaway.com slipped 4.5% to the bottom of the STOXX 600 after Bernstein downgraded the stock to “market perform”. Other food delivery firms Delivery Hero and Deliveroo plunged ahead of an EU Commission ruling on gig workers later this week.