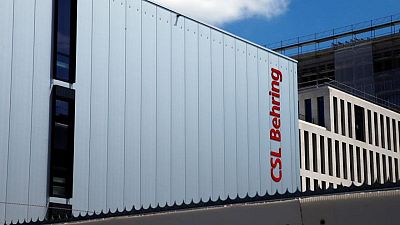 – Australian biopharmaceutical giant CSL Ltd is in exclusive talks to buy Swiss drugmaker Vifor Pharma in a A$10 billion ($7 billion) deal, Australian media reported, sending the Swiss drugmaker’s shares up by a fifth.

After discussing a potential deal since March, the companies were now in advanced talks and CSL, the world’s largest maker of blood plasma treatments, was carrying out due diligence on the Swiss firm, according to reports in The Australian Financial Review and The Australian.

The reports said the deal valued the Swiss company, which makes prescription medications and is focused on treatment of kidney disease, at about A$10 billion without giving further details about the potential deal.

Both Vifor Pharma and CSL said in separate statements that they will not comment on the speculation.

Morgan Stanley analysts said in a research note that CSL may be seeking diversification because blood plasma collections – where it pays people to give blood, which it then converts to treatments – remained depressed due to COVID-19 restrictions.

“Diversification could be wise, although it could lead to near-term de-rating until any potential synergies are evident to the market,” the Morgan Stanley note said.

Jefferies analysts said in a note that the potential buyout would be “a departure in terms of therapeutic area for CSL but does tie into their nascent kidney transplant franchise”.

Vifor’s shares closed 21% higher at the top of Swiss mid-cap index on Thursday. CSL shares were down 1% in early trading on Friday, against a slightly higher overall market.