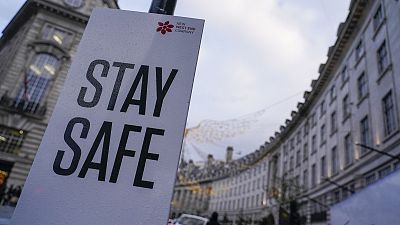 The efficacy of new nasal spray that could prevent the spread of COVID-19 is being tested during new trials at a biohazard clinic in the UK.

It's hoped by the researchers who have spent a year independently testing the spray - created by Raphael Labs, a biotech company created by scientists from universities around the world - that it could either stop or treat the virus, regardless of the strain.

The nasal spray works as a prophylactic rather than a vaccine. The idea is that it is used as a preventative measure against the virus.

"For the virus to enter the cell, it needs to undergo certain very specific chemical reactions," said Rakesh Uppal, Raphael Labs' chairman and a Professor of Cardiovascular Surgery at Barts and the London School of Medicine.

"We've been able to find a way to manipulate that chemical reaction, and therefore stop the virus from entering, and it's fundamental to that virus.

"It doesn't matter what strain it is, we've shown that mutation agnostic. We've tested it against all the viruses of concern, all the mutations of concern, and it has equal efficacy because it's a chemically-based solution".

Called pHOXWELL, the spray works in a completely different way to vaccines. Uppal says it's more like a barrier than a vaccine.

"What a vaccine does is it allows us to generate antibodies in the expectation of a viral attack," he says.

We've tested it against all the viruses of concern, all the mutations of concern, and it has equal efficacy because it's a chemically-based solution.

The spray itself is made using plant compounds, which are naturally virucidal. However, the company is not releasing a list of extracts it's using until its studies go through peer review and publication.

The company's confidence comes from a trial of 648 health workers in India.

The trial was carried out during the peak surge of the highly infectious Delta variant during April and July this year.

It was randomised and double blind, so none of the participants - or those who distributed the pHOXWELL spray - knew whether it was a placebo or not.

Of the 13.1 per cent of pHOXWELL patients who did test positive, only 17 per cent experienced symptoms of COVID-19, compared to 34.6 percent in the placebo group.

The Raphael Labs team were deliberately looking for a preventative measure that was inexpensive, affordable to low and middle income people in poorer countries, and which didn't need the infrastructure of a clinic or hospital.

According to Uppal, its production can be easily scaled up.

"We do not envisage any problems with supply chains," he said.

"One of the remits to the science team when we started the whole bit of work around it was to try and find a substance or a solution that was stable at room temperature, was easy to manufacture, was affordable, and where it could be manufactured in many different geographies across the world".

The spray was administered by the health workers themselves, so researchers don't know if everyone was taking it in a uniform way. They also can't know if some people were naturally more resistant to catching the virus.

"They weren't just frontline workers, they weren't just doctors and nurses, they were porters, technicians and labs, there were administrative staff who were going about their normal business day to day in their lives," says Uppal.

"So, in a way, it was far more important to have a trial that actually encompasses people who are living naturally and normally and not necessarily living under either adverse circumstances or having more PPE than anyone else."

A bottle of the spray is designed to last approximately 30 days, each application is claimed to be effective for between five and six hours.

Resistant to Omicron, Delta and others?

Testing of the spray at the Queen Mary laboratory has been done under the supervision of Professor Áine McKnight, professor of viral pathology at QMUL.

The proper results won't be known until there's been wider testing outside the laboratory, according Áine McKnight, professor of viral pathology at QMUL who also acts as an advisor to Raphael Labs.

But so far, it appears resistant to several viruses of concern she says.

"We tested them against, first of all, in the first wave, the Wuhan virus that came," said Knight.

"And then, as time went on, and we had more waves of different variants of viruses, we included those in our assays".