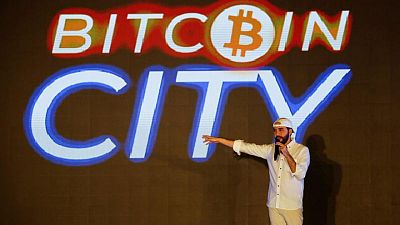 (This Nov. 25 story refiles to correct error in paragraph 15 to BlueBay, not Blue Bat)

By Sarah Kinosian and Rodrigo Campos

SANSALVADOR – El Salvador’s President Nayib Bukele took the stage last weekend at the end of “Bitcoin Week” to the cheers of fans delighted his Central American country has become the first to adopt crypto currency as legal tender, alongside the U.S. dollar.

Bukele, 40, wearing his signature backwards baseball cap, referred to himself as a “savior” as he unveiled plans to build “Bitcoin City” at the base of the Conchagua volcano overlooking the Pacific.

Funded by bitcoin-backed bonds and powered by geothermal energy, the city would offer a tax-free haven. “Invest here and earn all the money you want,” he told the euphoric crowd.

Supporters have hailed Bukele’s plans – including making bitcoin legal tender in September – saying they would bring jobs, financial inclusion and foreign investment to one of the Western Hemisphere’s poorest countries.

“Feel the Bit” read the giant screen before Bukele – who brands himself “CEO of El Salvador” on Twitter – came on stage. But some in El Salvador and beyond expressed outrage at the glitzy event in a nation beleaguered by inequality, violence and poor public services.

The government says the issuance of $1 billion in “Volcano bonds” in partnership with Blockstream – a digital assets infrastructure company – would provide development funds. El Salvador currently faces a $500 million budget gap for next year according to credit rating agency Fitch. But the bitcoin bond is not designed to cover that gap.

Half of the bond money would go to infrastructure, including for building Bitcoin City, with the remainder used to purchase bitcoin and locked up for five years. After the lock up, the bitcoin can be sold, generating a capital return that will be split 50-50 between the government and investors, only after the initial $500 million are recouped, according to the plan.

The 10-year bitcoin bond offers a 6.5% coupon, payable yearly, but another Salvadoran bond that matures in 2032 is currently yielding close to 13.9%.

Financial markets have reacted warily. The spread of Salvadoran yields to safe-haven U.S. Treasuries has widened sharply since late April. This week it added an extra 79 basis points and sits above 1,200 bps, its widest ever.

Investors sold off El Salvador’s bonds in May after the Bukele-controlled Congress fired the attorney general and five Supreme Court judges, who were replaced with loyalists, critics say. The 2025 bond yields more than 18%, according to Refinitiv data. With such a high cost, the country is effectively excluded from borrowing on the market.

“Building the economy around crypto mining and attracting crypto businesses is an untested strategy to put it mildly,” he said, adding Bukele did not appear to have plans to increase growth and tax revenues.

Talks with the IMF for a $1 billion loan have stalled amid concerns over a lack of transparency and the price volatility of cryptocurrency, as well as fears of democratic backsliding as Bukele consolidates power.

But many in the cryptocurrency community are upbeat, saying the bond will harness strong retail demand.

Several attendees aired worries about the government’s Chivo wallet, where Salvadorans can send and receive bitcoin – highlighting tensions over a state tool for a currency created as an alternative to government financial systems.

Pre-loaded with $30 for users and backed by a $150 million fund, Chivo allows users to make transactions to other Chivo users fee-free, but registration requires Salvadorans to enter their ID numbers and other personal information while transactions are kept on a ledger.

Some attendees described Chivo as a gateway to independent bitcoin wallets, such as Muun or BlueWallet, that offer privacy.

“When I make a payment, in the notes section, I write ‘use Muun, don’t use Chivo,’” said Wietersheim, using the hashtag #FixChivo on Twitter.

Since its rollout, Chivo has been criticized for thousands of cases of fraud and money disappearing from wallets.

Several programmers said that for the speed of implementation – less than four months after Bukele announced it at a June conference – these technical problems were normal.

Bukele has blamed high demand for the issues. A spokesperson for the president’s office and Chivo could not be reached for comment.