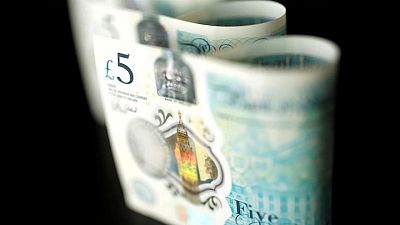 LONDON -Britain sold 1.1 billion pounds ($1.47 billion) of a new index-linked gilt maturing in 2073 on Tuesday, which will pay investors a record-low inflation-adjusted yield for a bond sold via a syndication.

The nominal value sold was the lowest of any gilt syndication since at least 2005, after the country scaled back its 2021/22 issuance plans last month. The amount raised was around 3.9 billion pounds as investors bought the gilt above its par value.

“The issuance event represented a significant amount of risk for the market to absorb but I am delighted that the transaction was very smoothly executed against what has been a volatile market backdrop over recent weeks,” he said.

Demand for index-linked gilts is generally high due to appetite from British pension funds and insurers who need to hold the debt to match long-term inflation-linked liabilities such as future pension payments.

Index-linked debt has drawn greater demand in recent months due to a surge in inflation that has pushed down inflation-adjusted yields to record lows.

Retail price inflation, which is used as the basis for British index-linked gilts, jumped to a 30-year high of 6.0% last month, and typically runs around a percentage point above the consumer price inflation targeted by the Bank of England.

The transaction attracted more than 17.5 billion pounds of orders, and sold at a real yield of -2.3883%, meaning investors will receive a return 2.3883 percentage points below the prevailing rate of retail price inflation.

A regular auction of 10-year index-linked bonds earlier this month had a record-low real yield of -3.242%.

Britain’s Office for Budget Responsibility cut its cash borrowing forecasts for 2021/22 by 83 billion pounds last month, prompting the Debt Management Office to reduce gilt sales for the remainder of the financial year by 58 billion pounds.

The volume of gilts sold on Tuesday was far below the record 12 billion pounds sold at a syndication of a 10-year conventional gilt in May 2020, when Britain was rushing to raise funds at the start of the COVID-19 pandemic.