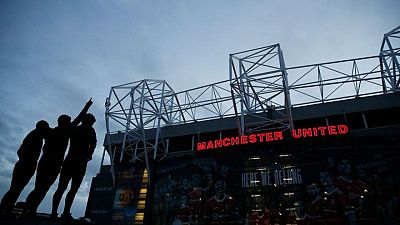 -Manchester United Plc’s first-quarter loss narrowed as the end of COVID-19 curbs in England allowed fans to return to its Old Trafford stadium at full capacity, offsetting a rise in salaries since the return of Cristiano Ronaldo in August.

The club, owned by the American Glazer family, on Wednesday posted a loss of 15.5 million pounds ($20.85 million) for the three months ended Sept. 30, compared with a loss of 30.3 million pounds in the same period a year ago when COVID-19 disrupted sporting calendars and shuttered stadiums.

With the stadium, commonly known as the Theatre of Dreams, now able to welcome back tens of thousands of fans, matchday revenues jumped to 18.8 million pounds compared with 1.7 million pounds a year ago. Total revenue rose 16% to 126.5 million pounds.

The 20-time domestic champions have made a patchy start to the Premier League season, losing four of their first 11 matches to rank sixth in the standings.

“While these financial results today demonstrate our resilience through the pandemic, our top priority is success on the pitch,” Vice Chairman Ed Woodward said in a statement.

Woodward is due to part ways with the club by the end of the year after attracting criticism for its involvement in the breakaway European Super League project. United has not yet named a replacement for the 49-year-old but reports suggest insider Richard Arnold is among the top runners.

Revenues from product sales jumped 21%, boosted by its new player signings and more home games being played, it said.