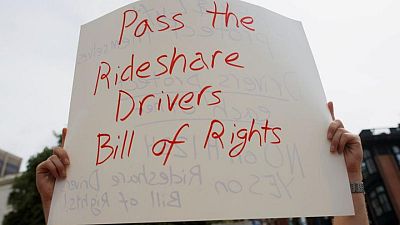 BOSTON – Backers of a measure that asks Massachusetts voters to treat drivers for app-based companies like Uber Technologies Inc and Lyft Inc as independent contractors rather than employees said on Tuesday they had gathered enough signatures to get it on the ballot.

Supporters said roughly 130,000 signatures have been submitted to town and city clerks for each version of a ballot question backed by a coalition of app-based service providers in the closely watched fight over gig workers’ legal rights.

The Massachusetts Coalition for Independent Work, whose members include Uber, Lyft, DoorDash Inc and Instacart Inc, in August proposed asking voters to declare their drivers independent contractors entitled to minimum benefits but not their employees.

The signatures were gathered by Flexibility and Benefits for Massachusetts Drivers, a committee associated with the group. The ballot question’s two versions are similar, though one lacks a safety training requirement in case opponents challenge it.

Signatures for 2022 ballot questions must be submitted by Wednesday for certification. At least 80,239 certified signatures must be delivered to the secretary of state by Dec. 1.

The proposal would establish an earnings floor equal to 120% of the Massachusetts minimum wage for app-based ride-share and delivery drivers, or $18 an hour in 2023, before tips. Drivers would be guaranteed at least 26 cents per mile to cover vehicle upkeep and gas.

Ride-share and delivery network companies would be required to pay healthcare stipends if drivers work at least 15 hours per week. Drivers could also earn paid sick time and paid family and medical leave.

The proposal follows a similar 2020 measure in California, where the companies persuaded state voters to solidify ride-hail and food delivery workers’ status as independent contractors with some benefits.

A California judge, however, on Aug. 23 ruled that the measure, Proposition 22, violated the state’s constitution.