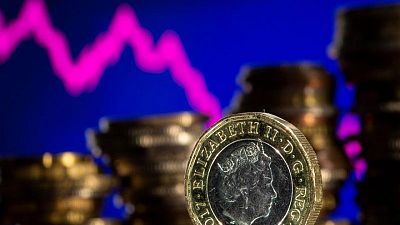 -UK’s FTSE 100 index ended lower on Wednesday as a surge in British inflation to the highest level in a decade fuelled bets that the central bank will raise interest rates as early as next month.

The FTSE 100, many of whose constituents draw a large part of their revenue in dollars, fell 0.5% as the sterling hit a one-week high against the greenback. [GBP/]

“There is no doubt that the BoE (Bank of England) will need to raise the base rate in the very near future. However, there is a risk that we extrapolate the sharp rise in CPI too far into the future,” said Edmund Shing, global chief investment officer at BNP Paribas.

“A lot of this current inflation pressure is due to supply chain disruptions and production shortages, which should ease over the next few months.”

Financial markets have currently priced in a near 100% chance that the BoE will raise rates in December to 0.25% from the record low of 0.1%.

The blue-chip FTSE 100 index has added 12.9% so far in 2021, underperforming a 22.8% rise in the pan-European STOXX 600, as supply chain snarls and concerns over inflation pressure markets.

Homebuilders dropped 1.4%, with Crest Nicholson, Taylor Wimpey and Barratt Developments down between 2% and 2.7% on worries that a potential hike in interest rates would hit housing demand.

Shares of valve maker Spirax-Sarco dropped 4.9% after it warned of supply chain pressures and a hit to profits from a stronger pound.

Sage Group jumped 9.7% to top the FTSE 100 index after the software company forecast growth of 8% to 9% in its organic recurring revenue this year.