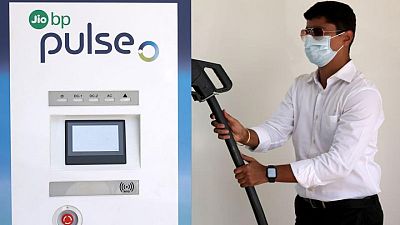 NEWDELHI – BP’s venture capital division could put up to a third of its new investments into India as it looks for deals in a clean mobility drive, a managing partner at bp ventures told Reuters.

So far, bp ventures only has one Indian investment – it put $13 million into EV ride-hailing firm BluSmart in September – and the country makes up about 2% of its $800 million portfolio. But Nadur expects to close a second deal in four months.

“India is a bubbly market so we shouldn’t be too slow about this, and we are not intending to be. It could be as much as a third of our investments in a few years,” she said.

Big oil firms such as BP are diversifying their investments as the transition away from fossil fuels threatens long-standing business models. It set up bp ventures over a decade ago to invest in game-changing tech firms across the energy spectrum.

In the clean mobility sector, it has invested in U.S. mobile EV charging company FreeWire and Israeli fast-charge battery firm StoreDot, among others.

While it does not have an allocated budget for India, the fund typically invests in five to eight deals a year of between $2 million and $20 million each, Nadur said.

Like many other countries, India is pushing automakers to build EVs and wants at least 30% of new car sales to be electric by 2030. But EVs make up only a fraction of sales now, mainly due to high battery costs and a lack of charging infrastructure.

BluSmart has teamed up with BP and its joint venture partner Reliance Industries to set up charging stations across the country. Tata Motors, India’s biggest electric carmaker, meanwhile, has a deal with BluSmart to provide 3,500 EVs for its fleet.

BP is also looking to invest in India’s EV charging infrastructure to support BluSmart, as well as battery storage and energy management to solve India’s challenges around peak power demand.

“We are very much focused on kick-starting the new disruptive areas which could be meaningful to BP in the future,” Nadur said.

The story corrects title in first paragraph to managing partner from managing director.