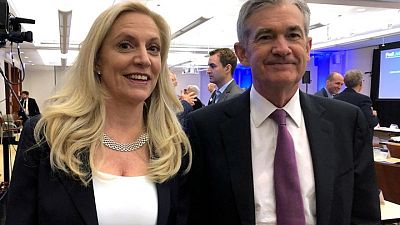 – President Joe Biden is still weighing whether to keep Jerome Powell as chair of the Federal Reserve for a second term or elevate Fed Governor Lael Brainard to the post, an administration official said on Wednesday.

The White House is cognizant of pressure from both moderates and progressives within the Democratic Party about the choice. “There are pressures going both ways for both finalists,” the official said.

Biden met with both candidates for the job last week, and a decision is expected in the coming weeks.

Powell, 68, who was appointed chair by former President Donald Trump and whose four-year term ends in early February, is seen as the front-runner.

He has backing from moderate Democrats as well as Republicans, and a track record of averting a financial crisis and helping to engineer an unexpectedly rapid and strong recovery from the pandemic recession.

But he has also drawn criticism as supply bottlenecks have driven inflation to a 31-year high even as millions of Americans cannot find jobs, and for a trading scandal on his watch that resulted in the resignation of two Fed presidents and a rewrite of the central bank’s ethics rules.

Democratic Senator Elizabeth Warren opposes his nomination, and progressives are pushing for Brainard, 59, who was named to the board in 2014 by Democratic President Barack Obama after serving in his administration.

Brainard is seen as more dovish on monetary policy and as a stronger hand on bank regulation. It is unclear how much support her nomination would muster from Republicans.

At the online political wagering site PredictIt.org, Powell remains the odds-on favorite, at about 68%. Brainard’s stock trails at 31%.

Regardless of his choice for the top Fed job, Biden will have a chance to shape the rest of the seven-member board. One seat is currently vacant. Governor Randal Quarles, until recently the Fed’s vice chair of supervision, plans to resign at the end of the year, and Vice Chair Richard Clarida’s term ends in January.

If Biden passes over Brainard for the Fed chairmanship, he could put her in Quarles’ old job, which she could use to write stricter rules for Wall Street and potentially take a more active approach on climate change, both important priorities for progressives.