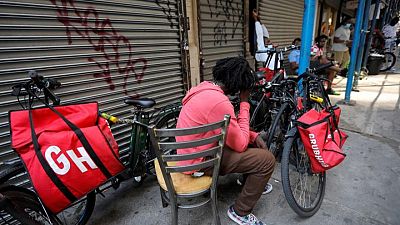 Cat Rock, which holds a 6.5% stake in Takeaway, renewed calls for it to sell U.S. arm Grubhub and put the proceeds to work defending its market positions in Europe.

The call comes a day after DoorDash, which is larger than Grubhub in the United States, made a big European move with the 7 billion euro ($8.1 billion) purchase of Finland-based Wolt Enterprises OY.

After experiencing rapid growth during the COVID-19 pandemic, established European food ordering companies such as Takeaway, Deliveroo and Delivery Hero are braced for consolidation and competition with a new generation of quick grocery and delivery companies.

CEO Jitse Groen responded to suggestions that DoorDash’s move could threaten Takeaway.com in Germany by saying: “Our business in Germany is bigger than the whole of Wolt worldwide”.

“Its competitive position is better than Doordash(‘s) in the US. But if you want to believe in fairy tales then I accept I cannot change your views,” Groen added on Twitter.

Cat Rock said in a presentation that Grubhub would be more valuable in the hands of a larger competitor interested in expanding its same-day delivery abilities.

A sale would also improve the valuation of Takeaway, which has lagged peers over the past year, and allow it to invest more heavily in defending its positions in Europe, Cat Rock added.

Takeaway responded to criticism from Cat Rock and other investors last month by noting that it has only recently acquired Grubhub and has plans to defend it against competitors such as Uber .

A Takeaway spokesperson said it had no further comment “at this stage”.