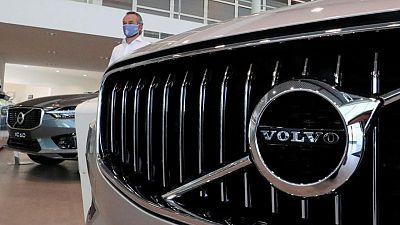 GLASGOW – Swedish automaker Volvo Cars said on Wednesday it had set a price on carbon emissions from its operations of 1,000 Swedish crowns ($116.30) a tonne, part of attempts to ensure all future projects are sustainable.

Announcing the move at global climate talks in Scotland as it joined an imitative to phase out fossil fuel cars and vans, the company said it had deliberately set a relatively high price to “future proof” itself.

Negotiators at the COP26 talks are trying to finish rules to create an international carbon market. Put simply, it would allow some countries to pay others to cut emissions – with the aim of pushing much-needed cash into green projects around the world.

Volvo Cars said it was the first automaker to set such a price across its whole operations, as part of its aim to be a climate neutral company by 2040. The price is double the current cost of carbon in the European Union’s carbon trading scheme.

Going forward, every new car project would go through a “sustainability sense-check”, with a carbon price assigned throughout the life of the vehicle, to ensure it would be profitable even under a much higher government-set price.

“A global and fair price on CO2 is critical for the world to meet its climate ambitions, and we all need to do more,” Björn Annwall, chief financial officer, said in a statement.

“We strongly believe progressive companies should take the lead by setting an internal carbon price. By evaluating future cars on their CO2-adjusted profitability, we expect to accelerate actions that will help us identify and reduce carbon emissions already today.”

Also on Wednesday, Volvo Cars signed up to the Glasgow Declaration on Zero Emission Cars and Vans, along with peers including Ford and General Motors, aiming to end production of internal combustion engines by 2040.