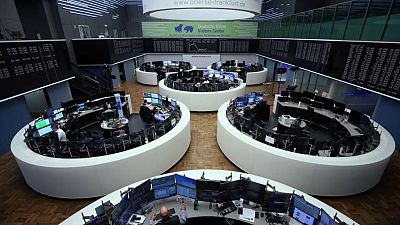 Short-term inflation expectations increased in October, according to survey findings released by the New York Federal Reserve on Monday, and consumers’ expectations for how much money they will earn and spend over the next year rose to the highest level in eight years.

Data out over the weekend also showed China’s exports beat forecasts in October to deliver a record trade surplus, although a miss on imports added to evidence of a slowing in domestic demand.

Tesla Inc fell 4.4% after CEO Elon Musk tweeted on Saturday he would sell 10% of his holdings if users of the social media network approve the proposal. Around 57.9% of the people voted “Yes.”

“The majority voted for him to sell, which effectively signals that he is going to dump stock on the market,” said Russ Mould, investment director at AJ Bell.

World shares gained 0.20% after hitting a record high last week as relatively dovish central bank messages and the strong labor data in the United States added to optimism generated by a healthy earnings season on both sides of the Atlantic.

Tightness in the labor market combined with dislocation in global supply chains should result in another high reading for U.S. consumer prices due on Wednesday, with any upside surprise likely to rekindle talk of an earlier Federal Reserve hike.

After some wild swings, Treasuries still managed to end last week with a rally, thanks partly to a huge drop in UK bond yields where short-dated debt enjoyed its best week since 2009 after the Bank of England skipped a chance to hike.

Traders sent most U.S. Treasury yields higher on Monday ahead of note and bond auctions this week.

Meanwhile, the dollar slipped on Monday, falling below the 15-month highs it hit after Friday’s jobs data, as investors reassessed rate hike expectations and central banks’ tolerance of inflation.

The retreat in bond yields was a boon for gold, which offers no fixed return, and lifted it to as high as $1,821.26 an ounce on Monday before turning flat on the day.

Cryptocurrencies, which like gold pay no coupon and are seen as a possible hedge against inflation, saw ether hit a record peak and bitcoin jumping to a three-week high.

Oil prices firmed as the passage of the U.S. infrastructure bill and China’s export growth supported the outlook for energy demand, while Saudi Arabia’s state-owned producer Aramco raised the official selling price for its crude.