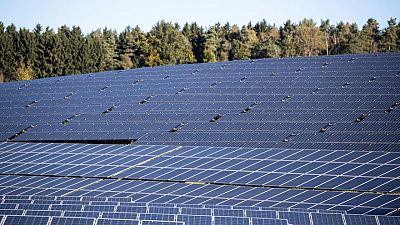 GLASGOW – The European Investment Bank and Allianz Global Investors said on Monday they plan to raise 500 million euros ($577.55 million) for a fund aimed at bolstering climate mitigation and adaptation in developing countries.

The Emerging Market Climate Action Fund (EMCAF), a fund-of-funds, is the latest announced at the COP26 climate talks in Scotland to bring together public and private investors – increasingly seen as a key way to help the world hit its climate goals.

As well as EIB and AllianzGI, the fund will have investment from the Governments of Germany and Luxembourg, the Nordic Development Fund, AllianzGI’s parent Allianz, and Swedish insurer Folksam.

The EMCAF, which will invest in other climate-focused funds and projects, aims to become a “flagship impact investing initiative”, an investing style that aims to track and measure the impact of the projects it backs.

Specifically, it hopes to launch climate projects in Africa, Asia, Latin America and the Middle East including in renewable energy such as solar and wind, energy efficiency in housing or industry, and adapting infrastructure to make it more resilient.

Investors in the fund will receive reports detailing the impact achieved, such as the amount of renewable energy produced and carbon emissions avoided.

“Supporting climate projects in emerging and developing countries is the key to meeting the Paris climate goals and to boosting economic activity on the ground,” said EIB Vice-President Ambroise Fayolle.

“This sends an important signal to the COP26 conference about the power of public-private partnerships to bridge the climate finance gap.”

As investment advisor to the fund, the EIB will be responsible for identifying and assessing potential investments, while AllianzGI will manage the fund.

“Many investors have become increasingly aware of the role their capital can and should play in addressing these imbalances,” AllianzGI Chief Executive Tobias Pross said.

“Impact investing can help to combine the twin goals of “doing good” and “earning a return” in a single investment.”