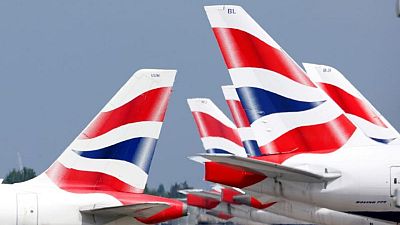 LONDON -British Airways owner IAG is “very optimistic” about the reopening of transatlantic travel and planning to ramp up capacity on those routes next year, fuelling recovery hopes despite warning of a big loss in 2021.

IAG, which also owns Aer Lingus, Iberia and Vueling, is more dependent on travel between Britain and the United States than its competitors and so has been hit harder by 19 months of North Atlantic travel shutdown during the COVID-19 pandemic.

Chief Executive Luis Gallego said on Friday the full reopening of that route on Monday was “pivotal,” and rising capacity would help return the group to profit next year.

“We are very optimistic and I think we are going to have 100% of the capacity that we flew in 2019 next summer,” he said, when asked about transatlantic routes.

“When we can operate our flights, we are going to come back soon to a profitable situation.”

“A bullish guide on capacity restoration into 2022 is the most important thing here,” Bernstein analyst Alex Irving said.

But for 2021, IAG warned it was heading for a 3 billion euro ($3.5 billion) loss, hurt by pandemic restrictions for most of the year.

That guidance was slightly behind analysts’ consensus forecast for a loss of 2.87 billion euros, but better than 2020’s 4.4 billion euro loss.

IAG‘s greater exposure to Britain, where travel restrictions were kept stricter for longer compared to the rest of Europe, and its lower exposure to cargo than peers means it has so far trailed European competitors in its recovery.

Air France-KLM has guided to slightly positive earnings for 2021 and Germany’s Lufthansa eked out a small quarterly profit for July-September.

Over the summer, usually the most profitable period for airlines, IAG posted an operating loss before exceptional items of 485 million euros for July-September, beating analysts’ consensus forecast for a loss of 513 million euros.