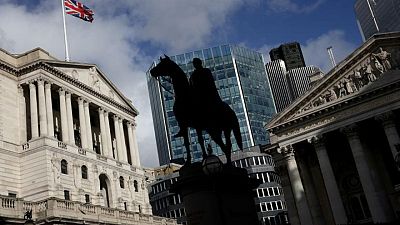 LONDON -The Bank of England should take a cautious approach to raising interest rates as the economy remains below its pre-crisis size and the health of the labour market is hard to interpret, BoE policymaker Silvana Tenreyro said on Friday.

Tenreyro – who voted to keep the BoE’s Bank Rate at 0.1% on Thursday and has generally been cautious about tighter policy – said central banks faced a trade-off between supporting growth and fighting potentially persistent inflation pressures.

But they should not jump the gun in reacting to rising inflation, especially in Britain where economic output was still well below where it would have been without the COVID-19 pandemic, she said.

“Central banks, not just the Bank of England, will need to balance their inflation and real-economy objectives. This balancing requires in my view a cautious approach,” she told a conference hosted by the International Monetary Fund.

The BoE wrongfooted markets on Thursday by keeping rates on hold, despite remarks last month from Governor Andrew Bailey and chief economist Huw Pill that investors had interpreted as paving the way for an early rise.

Pill, speaking at a separate event on Friday, said the MPC saw “some need” to tighten policy, but not yet.

Tenreyro said she, like other policymakers, wanted a clearer sense from data of the impact of the end of Britain’s furlough programme, which stopped on Sept. 30 when around 1 million workers were still on it.

Although inflation expectations had risen, Tenreyro said this was in line with the events of 2008 and 2011 when energy prices had spiked but not led to persistent inflation.

Policymakers should meanwhile be “very watchful” of wage pressures. “As soon as we see that picking up, that’s where monetary policy has a bite. Monetary policy cannot really do anything about a spike in energy prices,” she said.

Some inflationary factors might prove persistent, “which means central banks are effectively in trade-off territory, having to strike a balance between how quickly to bring inflation back to target and how much to continue to support the economy through the ongoing recovery,” she added.